Here We Go: USA Today Replaces ‘Male’ With ‘Transgender’ in Op-Ed by Connecticut’s Fastest Female Runner Who Called Out ‘Unfair Fight’ and ‘Tangible Harms’ of Competing Against ‘Male Runners’

USA Today removed the word ‘male’ from an op-ed by a female runner after she called out the ‘unfair fight’ in competing against transgender athletes.

Chelsea Mitchell wrote about her time competing in Connecticut in a piece for the site published last week, where she said she had lost to ‘male runners’.

Without consultation, USA Today then removed the word ‘male’, calling it ‘hurtful’, changing it instead to ‘transgender’.

That decision has been slammed as ‘appeasing the mob’ by Mitchell’s lawyer, Christiana Holcomb, who tweeted: ‘This blatant censorship violates the trust we place in media to be honest brokers of public debate.’ 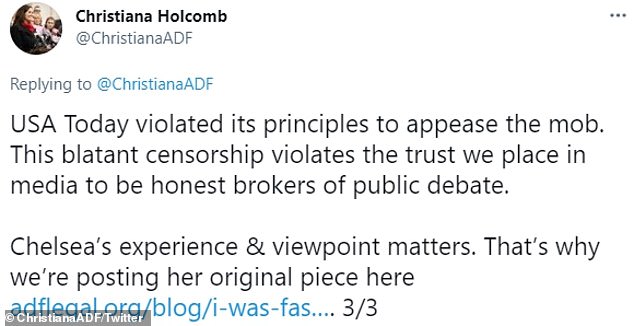 Holcomb added: ”@USATODAY published our client Chelsea Mitchell’s opinion about the unfairness she experienced being forced to compete against male athletes.

‘But after backlash from the woke mob, editors unilaterally changed Chelsea’s words & called them “hurtful language.”  What was the “hurtful language” that editors deleted from Chelsea’s opinion piece three days after publication? The word “male.”

‘USA Today violated its principles to appease the mob. This blatant censorship violates the trust we place in media to be honest brokers of public debate.

Holcomb then shared a link to Alliance Defending Freedom which ran Chelsea’s op ed in full without the changes.

Mitchell, along with two other runners, launched a lawsuit at the beginning of last year seeking to block a state policy that allows high school athletes to compete based on the gender with which they identify, arguing transgender girls have an unfair physical advantage.