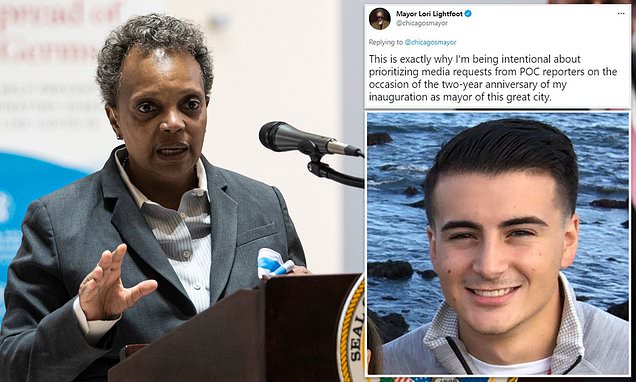 On Thursday, the backlash to the mayor’s decree hit a new level, with a white reporter from the Daily Caller suing Lori Lightfoot (left) in the United States District Court for the Northern District of Illinois. The lawsuit, filed by Daily Caller News Foundation and Judicial Watch, alleges that Thomas Catenacci (right) was denied an interview by Lightfoot. The lawsuit claims Catenacci’s First Amendment rights were violated, as well as his Fourteenth Amendment right to equal protection. Lightfoot, who assumed office in May 2019, announced last Tuesday that she would only grant one-on-one interviews to ‘black and brown’ reporters to mark her two-year anniversary in office. Her announcement about the temporary policy sparked anger from reporters of all colors, but Lightfoot doubled down on her decision the next day, insisting it was part of her lifelong battle for diversity and inclusion. While the lawsuit doesn’t specify if Lightfoot is being sued for damages, it does include request for a jury trial.