‘I feel like I can’t say anything’: Los Altos, California councilwoman Lynette Lee Eng is branded racist after revealing a text BLM activist sent her warning ‘your name will be all over the papers’ when she didn’t vote his way on police reform proposal 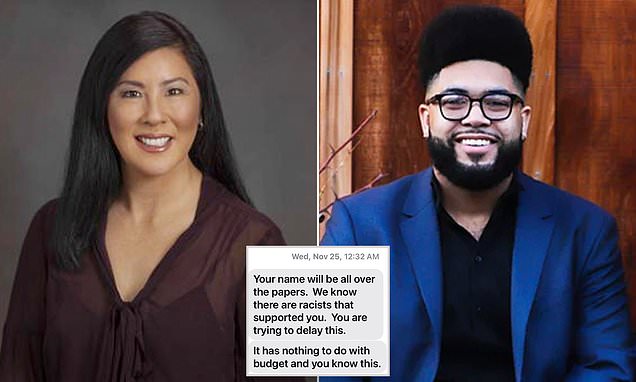 Lynette Lee Eng is a city councilwoman in Los Altos, next to Palo Alto, a rich and Democratic area of northern California. In November, she was asked to vote on a proposal to remove resource officers from schools and to overhaul how the city’s small police department handled complaints. She said it was a rushed vote, pushed through by the outgoing mayor who was the city’s first black mayor and who wanted to get the proposal passed in her final days in office after the outrage sparked by George Floyd’s killing. Lee-Eng voted to abstain because she said she wanted more information on the subject. Immediately after voting, she received a text from Kenan Moos, the 22-year-old organizer of Justice Vanguard warning her: ‘Your name will be all over the papers.’ Because the meeting was still ongoing and happening virtually on Zoom, she announced the text she’d just received and said she was worried for her family’s safety. He then texted her again, saying he hadn’t threatened her and was just ‘disappointed’ in her.