Father sues police after they searched an URN with his two-year-old daughter’s ashes in it during a traffic stop claiming it contained drugs and then joked about it: Toddler died after being abused and starved by her mother and mother’s boyfriend 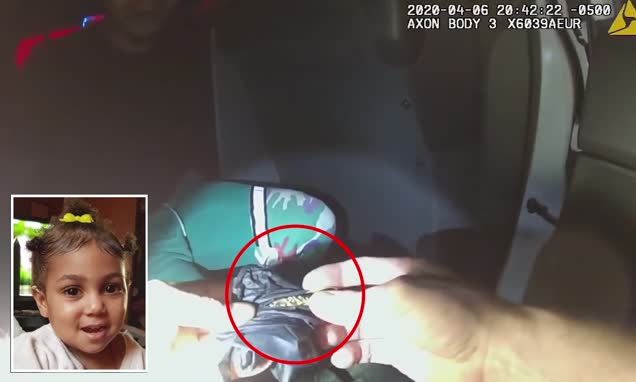 The incident unfolded on April 6, 2020 when Dartavius Barnes was pulled over by police in Springfield, Illinois, for allegedly speeding. Video (pictured) shows the cops telling Barnes they have found meth or ecstasy in his car. The baffled father asks to see and is visibly distressed as they show him the urn containing his two-year-old’s remains. ‘No, no, no, bro, that’s my daughter,’ he cries. ‘What ya’ll doing bro?’ Cops are later heard joking about the incident saying they had ‘p***** off’ Barnes by ‘testing the dead baby ashes.’ Ta’Naja Barnes (inset) died of neglect and starvation in February 2019, with the toddler’s mom and stepfather sent to prison for her murder. Barnes is now suing the city claiming the officers ‘desecrated his daughter’s ashes’.