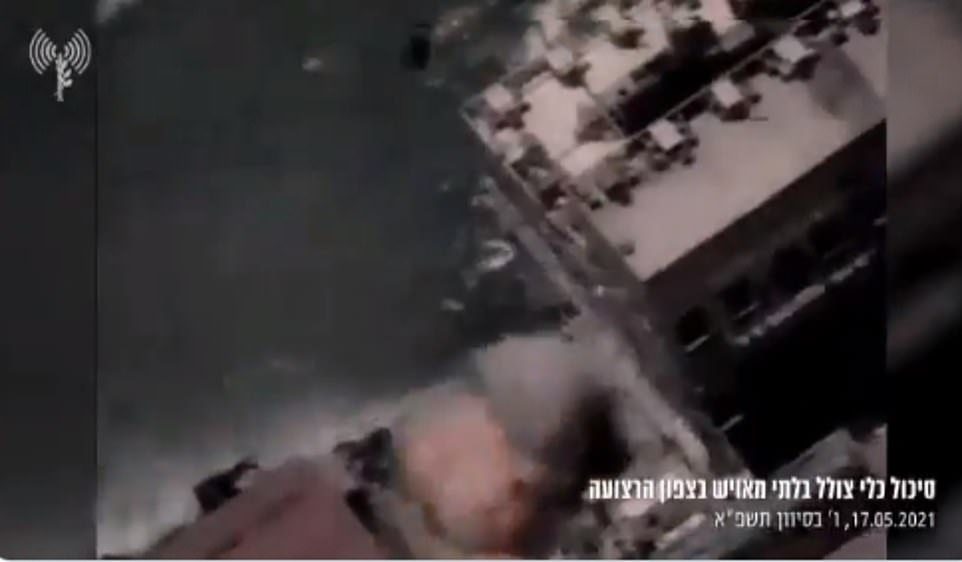 Footage has revealed the moment a Hamas ‘suicide submarine’ drone was obliterated by an Israeli airstrike – and the crew operating it were ‘neutralised’ in their car – as bombardments on Gaza continue despite US calls for ceasefire.

Video taken from the air by Israeli aircraft on Monday shows two missiles smashing into the drone submarine and a huge explosion erupting in the shallow waters close to a tower block in northern Gaza.

Another piece of aerial footage then shows a car being tracked by overhead cross hairs before it is rocked by a blast which brings it to a swift and fiery halt. The IDF said the militants inside had launched the autonomous submarine.

Photographs of the car later showed its roof ripped open in a pattern which suggests a six-bladed ‘ninja’ missile was fired. The missiles are designed to cut through cars, killing targets with minimal collateral damage.

The Israeli Defence Forces did not specify what Hamas were planning to target with their explosive-laden submarine but they have previously fired rockets at naval vessels and oil rigs in the Mediterranean.

The vessels can be armed with up to 70 pounds of explosives and GPS tracking is used to direct them towards targets.

‘The submarine that was attacked was launched from the shore in Gaza,’ the military said. ‘It went a few meters deep and was directed at a target, which could have been an Israeli beach or Israel Navy boats.’

The IDF announced 65 Hamas targets were hit by air strikes last night as Benjamin Netanyahu vowed to ‘continue striking the terrorists’ despite Joe Biden’s calls for ceasefire amid a rising civilian death toll.

A total of 212 Palestinians have been killed in Gaza, including 61 children, since the conflict started last Monday. The IDF says that figure includes 120 members of Hamas and 25 members of Palestinian Islamic Jihad.

Ten Israeli civilians, including a child, have been killed in rocket fire from the Strip.

The IDF last night said it blasted through more of ‘The Metro’, the militants’ underground network of tunnels and bunkers which are used as hideouts and for shipping weapons underneath the densely populated city.

Meanwhile Hamas fired 70 rockets – most of which were intercepted by the Iron Dome defence system.

At least two Israelis were killed and several more were seriously injured on Tuesday after a rocket from Gaza struck a factory in southern Israel – following several hours of relative calm this morning.