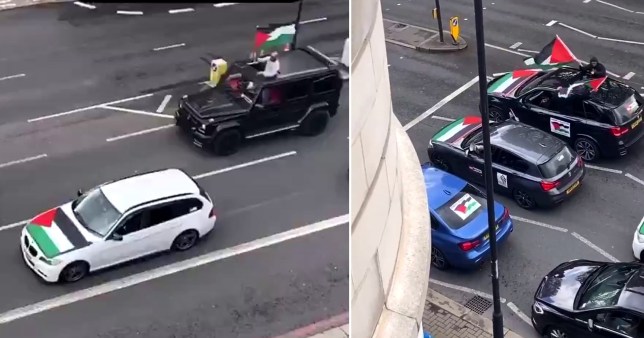 People have been filmed driving through London in a convoy of cars shouting antisemitic obscenities.

One of the passengers yelled ‘F**k the Jews, rape their daughters’ through a loudspeaker as they drove through residential areas.

Video was filmed in Finchley Road, St John’s Wood, near a Jewish Community centre, with the man claiming ‘We have to send a message’.

The cars, carrying Palestinian flags, are understood to have then driven towards central London to continue their rally.

The incident was described as ‘genuinely terrifying’ when posted online.

Housing minister Robert Jenrick also shared the video, saying: ‘This, on the streets of London is deeply disturbing. Vile, criminal hatred like this must not be tolerated.’

This, on the streets of London is deeply disturbing. Vile, criminal hatred like this must not be tolerated. https://t.co/MAQbuqBvhV

We are aware of a number of cars that have joined a demonstration in central London this afternoon. Road closures are in place around #Whitehall and disruption is expected. Officers are in the area and are engaging with those taking part.

Boris Johnson said: ‘There is no place for antisemitism in our society. Ahead of Shavuot, I stand with Britain’s Jews who should not have to endure the type of shameful racism we have seen today.’

Comedy writer Sara Gibbs tweeted: ‘I am one of the daughters people are calling to be raped. For the crime of being Jewish. For the crime of not being able to control a conflict dating back decades before my birth thousands of miles away. Palestinians deserve better than this “activism”. This isn’t how to help.