Gas runs out in Biden’s backyard: 88% of D.C.’s gas stations are empty as fuel price climbs to $3.04 a gallon after Colonial Pipeline reopens; Russian hackers DarkSide ‘shut down’ after getting $5 million ransom 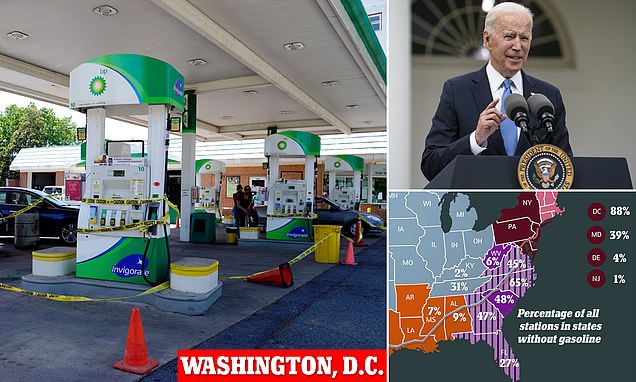 Nearly 90 percent of Washington DC’s gas stations had run out of fuel by Friday. It came despite Colonial Pipeline ramping up deliveries in the wake of the cyberattack that shut down its system for six days. Widespread panic buying is still ongoing, which has left filling stations across the Southeast out of gas – even in areas far from the pipeline. The average national gasoline price climbed to almost $3.04 on Friday, which is the most expensive since October 2014. President Biden said supplies should start to return to normal this weekend. Colonial Pipeline announced late Thursday it had restarted its entire pipeline system after the six-day disruptive shutdown. Some states experienced modest improvements but still had a lot of gasoline outages, including North Carolina where 70 percent of gas stations had run dry.