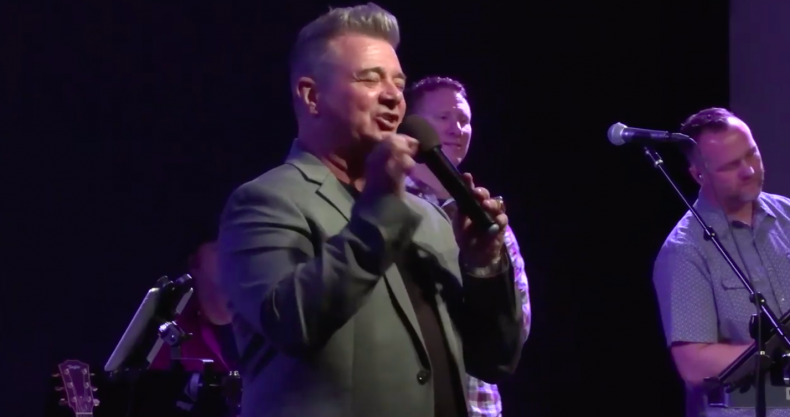 Evangelical pastor Jeff Jansen, a self-described “prophet,” has been asked to step down from the ministry he co-founded and has chosen to leave his wife and family to “pursue his own desires,” according to emails sent out this week by his ministry’s leadership team and his wife.

Jansen, a staunch supporter of former President Donald Trump and co-founder of Global Fire Ministries International in Tennessee, predicted in March that Trump would be back in office with the support of the military by the end of April. Despite that prophecy failing to come true, the pastor this week published videos on his official Facebook page saying he was “tripling” and “quadrupling” down on his prediction that the ex-president would return to the White House.

But in a May 5 email reviewed by Newsweek, the leadership team at Global Fire Ministries said that Jansen had been asked to step down and that he and his wife would be separating. Jan Jansen, the pastor’s wife, co-founded the ministry with him 11 and a half years ago.

“It is with deep sorrow that Jeff Jansen has been asked, by his board, to step down as Co-Senior Leader of Global Fire Church, and from Global Fire Ministries due to unscriptural and unbiblical behavior. He was asked to step down in April, and this was made public to the church body on May 2, 2021. A statement was released to partners and friends on May 5,” the email said.

The statement went on to explain that Jansen had shown “a pattern of making poor moral choices, and bad coping mechanisms, [and] character flaws.” The ministry’s leaders said that his behavior and lifestyle had “fallen below Biblical standards laid out for those in leadership” and that he’d been “confronted” over his behavior “over a period of time.”

“Rather than submit to the process of healing and restoration, Jeff recently made an intentional decision to leave his wife and family to pursue his own desires. He remains unrepentant and unremorseful,” the ministry said. The statement noted that any further actions or statements from Jansen should not be associated with Global Fire Ministries.

In a separate and lengthier May 5 email forwarded to Newsweek, Jan Jansen provided additional details about the situation and her husband’s personal struggles.

“Unfortunately, Jeff struggled for many years dealing with the stress and warfare of his travels. Being a high-level, recognized minister, this led to poor choices in coping mechanisms. I don’t believe he was strong enough to withstand what was coming at him because of his very public stand for President Trump and against the dark side. When you take a stand like that, you must have no cracks in your armor. Jeff never really humbled himself enough to get healing for his soul and seal the cracks,” she wrote.

Jan Jansen reiterated that her husband had chosen to leave her and his children to “pursue his own desires.” She wrote that it “grieves me and breaks my heart to have to announce this, and I just pray to healing over you as I say it.” She asked supporters to “pray” for her husband and said that he “will wake up and seek full restoration.”

As of early Friday afternoon, the ministry’s website was locked and could be accessed only with login credentials. Jeff Jansen’s Facebook and Instagram pages still list him as the founder of Global Fire Ministries and do not mention his departure from the church or his decision to leave his family. The pastor’s most recent Facebook and Instagram posts, published early Friday, feature a quote from himself.

“Fall asleep with nothing but love and forgiveness in your heart. What’s meant for you will be for you tomorrow and the day after. Trust the journey. Rest your soul,” the quote says.

A previous post published on Thursday features a picture of Trump holding a baby in each arm as he crosses a body of water. In the background, several shadowy figures that appear to have weapons are on the bank of the river, behind the image of the former president.

On Wednesday, Jansen posted a video saying that “the rats are gonna be exposed” and that “President Trump [is] stepping into his place.” The pastor added that “God is preparing the Earth for great global glory revival. So watch what happens.”

Newsweek reached out to Jeff Jansen, Jan Jansen and Global Fire Ministries for further comment but did not receive a response before publication.

Conservative Christians, and particularly white evangelicals, have long been a key base of support for Trump and Republicans. Exit polling from the 2016 and 2020 elections showed that about eight in 10 white evangelicals cast their ballots for Trump. The conservative religious community has long been politically motivated by social issues and is generally staunchly opposed to women’s reproductive rights, LGBTQ rights and legal protections for the transgender community.