US is finally set to order travel restrictions for India where medics say 30,000 are dying a day from three new deadly coronavirus plague variants in raging epidemic with 14 direct flights a day coming to America — it may be too late 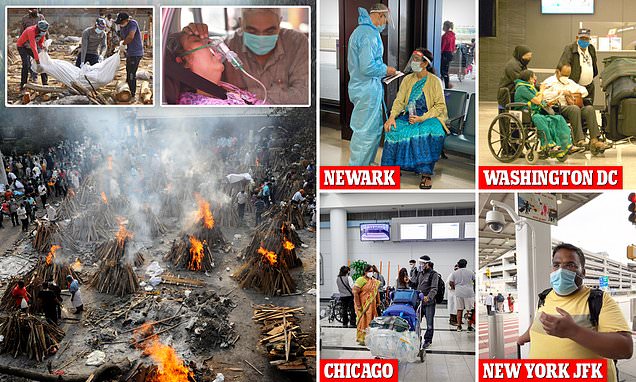 The US government is finally set to enforce travel restrictions from India where medics say 30,000 people are dying every single day, bodies are piling up in the streets and three different types of its homegrown variant are ravaging the country.

The ban, which only applies to non-US citizens, won’t come into effect until next Tuesday.

The announcement comes two days after the State Department issued a Level 4 travel advisory, which is the highest alert of its kind, urging all Americans to leave India if they can because of the current COVID-19 outbreak there.

The alert also advises Americans not to travel to India as the country experiences a catastrophic second wave that is, in part, fueled by a deadly Indian variant known as B.1.617. India saw its deadliest day yet, with more than 3,600 Covid fatalities, on Wednesday. More than 380,000 new infections were reported yesterday.

Until now, there was no word on whether the US government would issue any travel restrictions despite there already being bans in place on the UK, South Africa, Brazil and a number of European countries.

Each day, 14 direct flights are arriving in the US from India, packed with people fleeing a catastrophic second wave.

Passengers flying back into the US from India on Thursday and Friday told DailyMail.com that the majority of their flights were full.

Health chiefs have now split the Indian variant, known as B.1.617, into three distinct variants because it has mutated into similar but genetically different viruses. Early research has suggested the vaccines are effective against B.1.617.

The US Centers for Disease Control and Prevention (CDC) does not consider B.1.617 a variant of ‘concern,’ like the UK, South African or Brazilian variants, or even slightly less worrisome ‘variant of interest.’ The agency does not publish tracking of B.1.617 variant, likely because it has a nominal presence in the U.S.