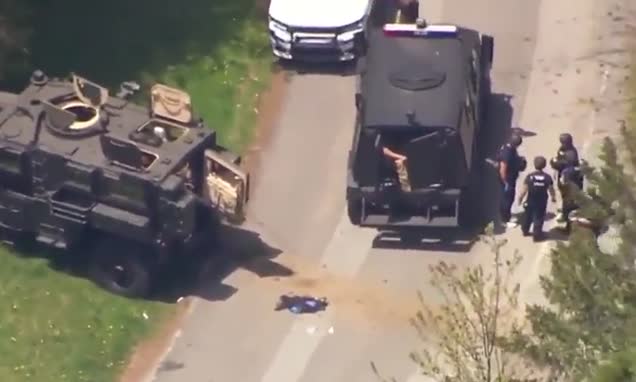 A man allegedly killed his mother and father in North Carolina before then shooting at least two deputies who conducted a welfare check at the home – killing one of them, according to a local politician.

The man and the names of his victims have not yet been identified but the news was announced in the North Carolina General Assembly by state representative Ray Pickett.

Pickett said at 4:30pm that specialist armed units were still trying to get the suspected killer out of the house, and that he was firing pot shots at them from the building.

‘I received some terrible news from Watauga County today. We’ve had a situation, at first we thought it was a teenager but through further reports, he was an older gentleman,’ Pickett said.

‘He killed his mother and father today. Sheriff’s deputies responded to a welfare check. He ambushed them, shot three of them – killed one. A second one is holding on by a thread.’

Pickett, who addressed the state legislature around 4.30pm, said law enforcement was ‘trying to get the man out of this house as we speak.’

He then asked to be excused from the rest of the day’s legislative votes.

The Watauga County Sheriff´s Office said the shooter remains barricaded in a portion of the home and has periodically fired at law enforcement officers at the scene.

Deputies were dispatched to a home in Boone at around 9.44am after the homeowner and his family did not report for work or answer telephone calls, the sheriff’s office said in a news release earlier.

Deputies entered the home and were fired upon, the news release said. One deputy was shot, removed from the house and taken to a hospital in Johnson City, Tennessee. The second deputy is still at the scene of the standoff and their condition isn´t known, according to the sheriff’s office.

The sheriff´s office says law enforcement has surrounded the home and residents in the vicinity of the standoff have been evacuated.

The North Carolina State Bureau of Investigation was filmed arriving at the scene.

DailyMail.com has reached out to the Watauga County Sheriff´s Office for more information and additional comment.

Clarence Wilson, 78, was on the porch of his home in Boone when sheriff´s deputies pulled up in front of the house across the street. Gunfire erupted after the deputies arrived, Wilson said.

‘Then they told me to get back in the house and stay,’ he said.

Wilson said he saw deputies pull a man from the house.

‘I don´t know if it was a deputy or who it was,’ he said. ‘I was just worried about keeping myself safe.’

Wilson said he heard a second barrage of gunfire around noon. Police remained on the scene more than four hours later, he said.

He said it´s a ‘real quiet neighborhood’ with many retirees like himself.