Film trucks and catering marquees have been erected in the sprawling grounds of Highclere Castle as filming for the Downton Abbey sequel gets underway.

The beloved BBC series is being adapted into a second movie following the first’s box office success, with cast and crew returning to the set in Hampshire, England.

Little is known about the upcoming movie, but it has been confirmed that Hugh Dancy, Laura Haddock, Nathalie Baye and Dominic West have joined the cast, and it is expected to be released at Christmas.

Aerial pictures from the set show that production is now well and truly underway for the film sequel, which began filming earlier this month.

Nestled on the grounds of the 5,000-acre estate filming equipment, trailers and trucks can be seen, while a catering marquee has been erected behind the stable courtyard and tennis court.

The exterior shots and some inside scenes for the television series and subsequent movies have all been filmed inside the Gothic style house, which boasts grand, historic rooms such as a library and a great hall, and is set in 1000 acres of parkland.

Although some scenes are filmed in studios and at different locations, the cast and crew spend much of their time at Highclere – which is the home of the 8th Earl and Countess of Carnavaron, whose family have lived there since 1679.

The Countess of Carnarvon has welcomed the decision to film the sequel at Highclere, explaining that even though it provides her with plenty of extra work, the hustle and bustle bring the castle ‘alive’.

She told The Daily Mail that when filming was taking place — from February to June for each of the six series of Downton and an additional one-off two months for the film — she was flat out.

Constantly in the wings, showing crew how to move furniture — ‘you take a girl in your arms and a chair by its bottom’ — and reminding people to wipe their feet and respect the carpets.

Yet, despite all the palaver, Lady Carnarvon is thrilled. ‘We all got very used to each other. We had a good routine. It was like a new term at school — “here they come!”

‘After all, a house like this is used to being busy, to being full of life. ‘It comes alive with people and without them things go wrong.’

A statement on the Castle website reads: ‘We are thrilled to be welcoming Downton Abbey back to Highclere again. Julian and the wonderful cast and crew became so much part of our lives here at Highclere and we look forward to our next adventure with them’

On filming days the Castle will be closed to the public. However all the tours of the Castle and gardens already scheduled will still take place.

The new images have been released after star Hugh Bonneville revealed filming was officially underway earlier this month. Sharing a tweet on set, he stated: ‘Good to be back’.

Producer Gareth Neame said: ‘After a very challenging year with so many of us separated from family and friends, it is a huge comfort to think that better times are ahead and that next Christmas we will be reunited with the beloved characters.’

Focus Features chairman Peter Kujawski said: ‘There’s no place like home for the holidays, and we can’t imagine a better gift than getting to reunite with Julian, Gareth, and the entire family in 2021 to bring the Crawleys back home for their fans.’

In February, Hugh revealed he’d seen a script for a Downton Abbey film sequel, saying it’s likely to happen once Covid is ‘under control in a sensible way’.

The star, who plays Lord Grantham in the movie and previous series of the hit period drama, chatted about plans for another film on The Zoe Ball Breakfast Show.

He told the BBC Radio 2 show: ‘Here’s the deal, if everybody who is offered a vaccine takes a vaccine, we can make a movie, we will make a movie.’

The actor, who has acted as a volunteer marshal at a COVID vaccination centre, told Zoe he’s seen a script for the film and added: ‘The planets are circling. They are beginning to get into alignment.

‘There is a thing called coronavirus knocking around and until that is under control in a sensible way, we are not going to be able to get all those ducks in a row.’

Hugh also said that he thinks audiences would ‘enjoy’ another Downton movie after the ‘mess we have been through’ in the past year.

The Downton Abbey movie saw beloved characters Robert (Hugh) and Cora Crawley (Elizabeth McGovern) told that they will be visited by the King and Queen and the estate have to prepare for the royal visit. 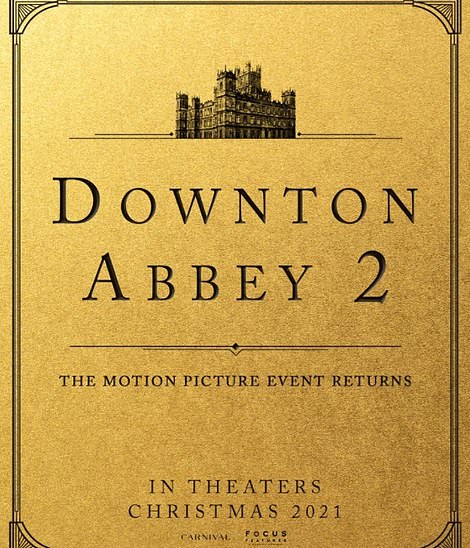 However the family have to deal with a number of set backs and problems along the way including a suspected assassin attempt.

The Daily Mail revealed that Maggie Smith, who plays Violet Crawley, and French actress Nathalie Baye will appear together in Downton 2.

Downton 2 will be the Dowager Countess of Grantham’s last hurrah. The theatrical dame has been delighting Downton fans since the series, created by Julian Fellowes, launched on ITV back in 2010.

In the new Downton film, Ms Baye will play an old friend of Violet’s who comes to visit her. Of course, the countess will be surrounded, as usual, by her family — including Hugh’s Lord Grantham and Elizabeth McGovern as his wife Cora.

Michelle Dockery’s Lady Mary and husband Henry (Matthew Goode) will be centre stage, too; along with her sister, Lady Edith, played by Laura Carmichael.