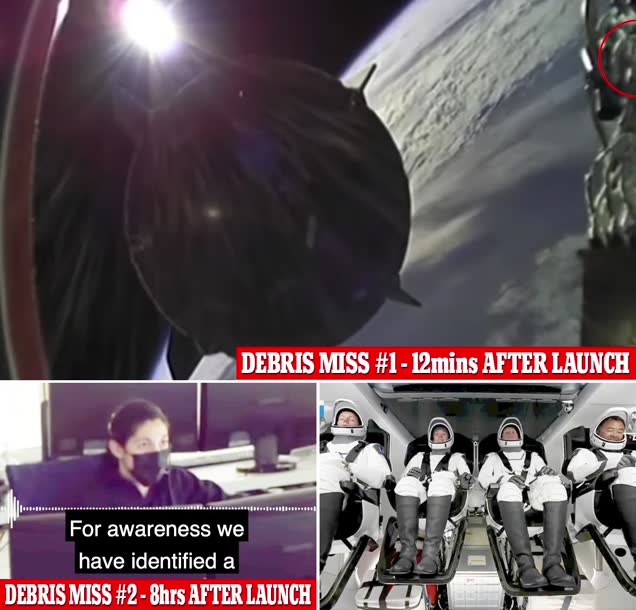 Four astronauts aboard the SpaceX Crew Dragon capsule had two close encounters with space debris Friday while traveling to the International Space Station.

When Crew Dragons separated from the Falcon 9 rocket’s second stage 12 minutes into the missions, a piece of debris from the front of the capsule broke off, shot to the right and then flew back around – missing the craft by mere seconds.

Then at 1:43pm ET, just about six and a half hours later, the crew was preparing to sleep when they were alerted to an ‘unknown’ object soaring their way.

‘For awareness, we have identified a late-breaking possible conjunction with a fairly close miss distance to Dragon,’ SpaceX’s Sarah Gilles told the astronauts.

‘As such, we do need you to immediately proceed with suit donning and securing yourselves in seats.’

The announcement came 20 minutes before the possible collision, forcing the crew to suit up and strap in their seats in preparation of an impact that could cause a loss of air pressure.

‘Copy Sarah, you want us in the suit for a possible close call,’Crew-2 astronaut Thomas Pesquet of the European Space Agency radioed back.

NASA captured the event via a livestream that shows a view of Dragon drifting away from SpaceX’s Falcon 9’s second stage, along with a clear view of the object soaring passed.

The unknown object was initially believed to be an immediate threat to both the crew and craft, but NASA later determined that the space junk passed around 28 miles away at its closest point.

Moments later, Gilles notified the astronauts that the capsule had passed the space junk with no impact.

However, some say if it were to hit the event would have been the worst collision since the 1986 Challenger that blew up on its way to space and killed the seven astronauts onboard.