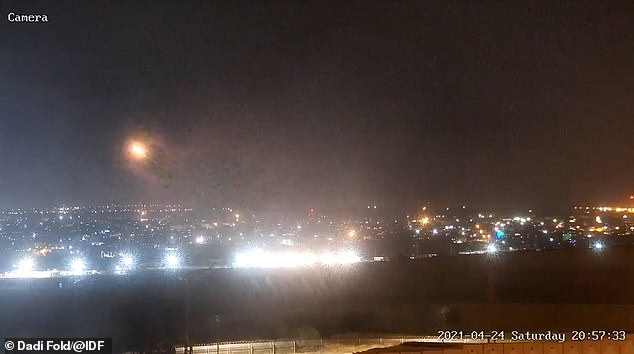 Multiple rockets were fired again at Israel from the Gaza strip on Saturday night after a mere day-long pause on attacks as Israeli police and Palestinians clashed outside Jerusalem’s Old City walls overnight.

It comes after thirty-six rockets were launched overnight Friday, the military said, the most in a single night this year.

As tensions flared in the capital during the Muslim holiday of Ramadan overnight into Sunday at least six Palestinians were injured and Israeli Prime Minister Benjamin Netanyahu appealed for ‘calm on all sides’.

But the premier also warned that that Israel remains ‘prepared for all scenarios’ after dozens of rockets were fired from the Gaza Strip towards Israel on Friday night, prompting Israeli retaliatory air strikes on targets operated by Gaza’s Islamist rulers Hamas.

But despite Netanyahu’s threats, further rockets were fired towards Israel from the Gaza strip on Saturday night.

The Israeli army said a rocket fired towards Sderot was intercepted by air defences while the second landed in an open field, the military said. A third projectile failed to cross the border, detonating inside the Gaza Strip.

The barrage of fire come as hundreds of Palestinians clashed with Israeli police in east Jerusalem after Hamas voiced support for the protests.

Netanyahu made the remarks after attending an emergency security meeting with senior officials, including army chief Aviv Kohavi, hours after Israeli warplanes struck Gaza early Saturday and a second night of clashes between Palestinians and police in Jerusalem.

‘First of all we want to ensure that law and order are respected… now we demand compliance with the law and I call for calm on all sides,’ Netanyahu said in a statement after the security talks.

The clashes on Saturday evening were less severe than on previous days, according to an AFP journalist at the scene.