Two Benin Bronze sculptures given to the Archbishop of Canterbury 40 years ago and due to be returned to Nigeria as ‘gesture of goodwill’ were made in 1980s and have no links to colonialism, officials say 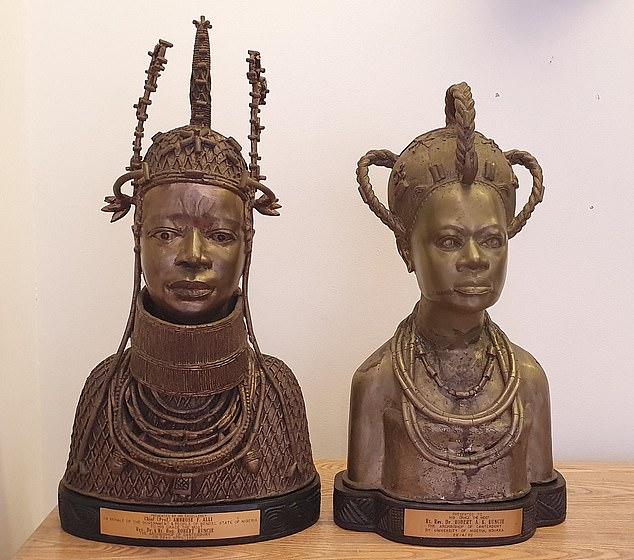 Two ‘Benin Bronze’ sculptures gifted to the Archbishop of Canterbury in 1982 that are set to be repatriated to Nigeria were made in the 1980s, officials have said.

Sculptures and plaques made for royalty in the former Kingdom of Benin and seized by British forces in 1897 have been the subject of growing calls for repatriation to Nigeria after Black Lives Matter protests.

The Benin Bronzes, among the most famous treasures taken, are currently on display at the British Museum, but a number of galleries have recently agreed to send similar items back, with the University of Aberdeen saying last month it would return a sculpture to Nigeria within weeks.

Lambeth Palace, the London residence of the Archbishop of Canterbury, then pledged to return two statues to given to former Archbishop Robert Runcie and the Church of England by the University of Nigeria in a visit nearly 40 years ago.

However, the two sculptures that are set to be returned as a ‘gesture of goodwill’ were in fact made in the 1980s, 100 years after most Benin Bronzes were seized, and have no links to Britain’s colonial past.

Experts are now questioning why the sculptures are being returned at all, with critics accusing the Church of England of ‘penitent decolonialisation’ despite the items being unrelated to imperialism.

A spokesman for the palace told the Telegraph: ‘The sculptures that we received as gifts in the 1980s are likely to be contemporary from that time.’