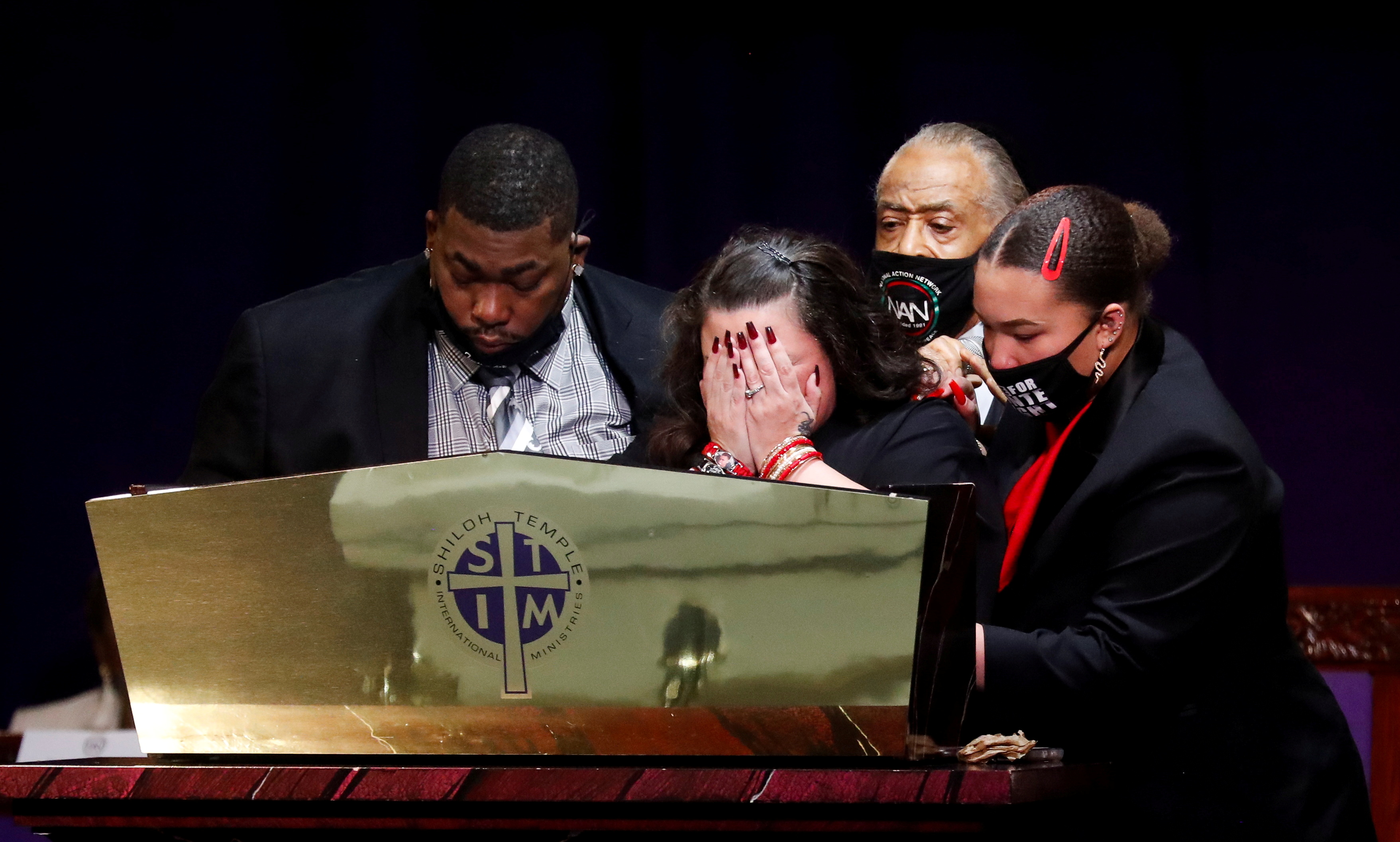 Hundreds of mourners, wearing face masks and weeping, filled a Minneapolis church on Thursday for the funeral of Daunte Wright, a Black man whose shooting by police after a traffic stop has sparked fresh concerns over the way cops treat people of color.

While the conviction brought a measure of satisfaction to people calling for an end to brutality and racism in policing, Wright’s death served as a reminder of the daily risks facing Black people during encounters with police.

On Thursday, Wright lay in a white casket at center of church, covered in red roses. His family members sat near the front of the church, wiping tears from their faces as an organist played gospel music.

“My son had a smile that was worth a million dollars. When he walked in the room, he lit up the room,” says Katie Wright, Daunte’s mother, who fought through sobs as she spoke.

Other family members, cousins and siblings, remembered Daunte as “the life of the party” and a father who lived for his beloved two-year-old son Daunte Jr.

His aunt, Naisha Wright, wrote a tribute on a prayer card handed out to attendees, recalling how she playfully nicknamed Daunte “lemon head” and how he would smile.

Wright was a talented basketball player and he particularly loved the Fourth of July, when he would celebrate with his family by lighting fireworks, the prayer card said.

Among the attendees at Shiloh Temple International Ministries, a church with a predominantly Black congregation, were Minnesota Governor Tim Walz, U.S. Senator from Minnesota Amy Klobuchar and U.S. Representative Ilhan Omar, who represents the congressional district encompassing Minneapolis and some of its suburbs.

George Floyd’s family was in attendance, as well as the loved ones of several other Black Americans who were killed: the mother of Philando Castile, the family of Emmett Till, the boyfriend of Breonna Taylor.

‘NOT ABOVE THE LAW’

The congregation clapped and shouted in enthusiasm at a eulogy given by the Reverend Al Sharpton and opening statements by attorney Ben Crump, who represents Wright’s family after representing many other families of slain Black Americans.

Both Sharpton and Crump expressed hope that Daunte Wright’s case would get “justice” in the court of law, receiving standing ovations.

“The time has come for police to understand that they’re not above the law, they’re to enforce the law,” Sharpton said.

Police video of the shooting in Brooklyn Center, Minnesota, shows multiple officers attempting to arrest Wright for an outstanding warrant during a routine traffic stop. It then shows Officer Kimberly Potter threatening to stun Wright with her Taser before firing her handgun. A few moments later, she can be heard exclaiming that she shot him.

Before he resigned, the city’s police chief Tim Gannon said Potter mistakenly used her gun instead of her Taser.

Potter, who also resigned after the incident, has been charged with second-degree manslaughter. She has not entered a plea and her lawyer, Earl Gray, has not commented about the case.

The shooting of Wright set off more than a week of demonstrations outside the Brooklyn Center police headquarters.

Governor Walz quickly condemned the shooting as an example of racism in his state and in the country.

“We know that this tragedy is connected to the deep and systemic racism in our society that Black people in Minnesota and across this country face every single day,” he said in remarks at the funeral on Thursday.

U.S. Representative Omar offered her condolences to the Wright family at the funeral and presented Daunte’s mother Katie with the flag that was flown over the U.S. Capitol in honor of her son.

Addressing the congregation on Thursday, U.S. Senator Klobuchar promised to work to pass the George Floyd Justice in Policing Act in the Senate, which the U.S. House of Representatives has passed and which aims to hold police officers accountable for misconduct.

“This is the urgent task before us,” Klobuchar said. “Racism in this country is not isolated, it is systemic.”