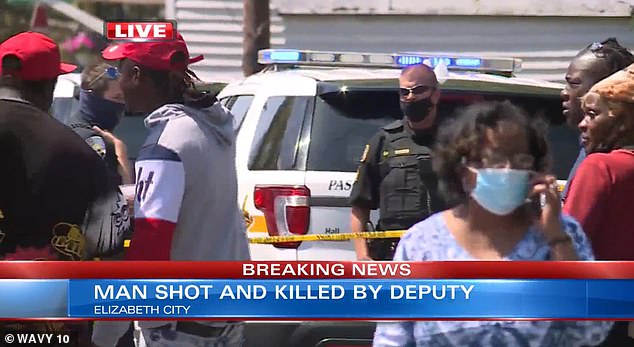 A North Carolina sheriff’s deputy was serving a search warrant on Wednesday morning when he shot and killed a black man who family members say was driving away from the scene.

Gunfire erupted at 8.30am in the 400 block of Perry Street in Elizabeth City. According to neighbors, they heard six to eight shots.

The Pasquotank County Sheriff’s Office confirmed one of its officers shot the man, but has released few details, including whether or not the victim was armed at the time of the incident.

During a press conference on Wednesday afternoon, officials remained tight-lipped and refused to answer most questions about the incident, citing an ongoing investigation.

Pasquotank County Sheriff Tommy Wooten II did confirm that a deputy from his department shot Brown. He revealed that the unnamed deputy has been on the force for about a year.

The deputy was placed on leave pending a review by the State Bureau of Investigation. His race has not been revealed.

Wooten said that the deputy was wearing a body camera but said he has yet to review the footage. It could take time for that video to be released since releasing such footage requires a judge’s approval in the state

Family members identified the victim as Andrew Brown Jr, a 40-year-old father of 10 children. It is unclear why he was being served with a search warrant, WAVY first reported.