Purged: $57,000-a-year elite NYC prep school fires teacher for threatening ‘wellbeing’ of students by speaking out against “woke” race lessons. He says the headteacher privately agrees with him 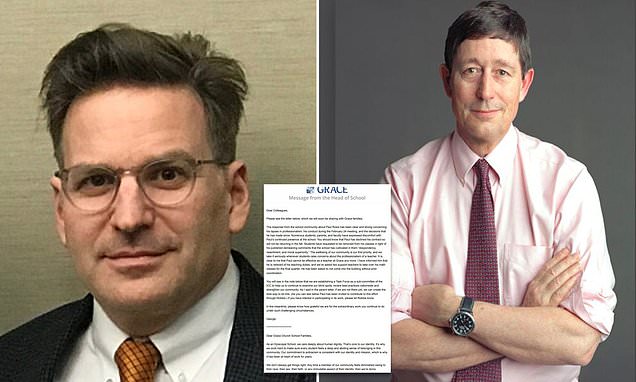 Grace Church School teacher Paul Rossi, left, went public with his complaints that the prep school was indoctrinating students in a blog post last week. He has now been ‘relieved of his teaching duties’ the school confirmed Monday, inset. Rossi is now claiming headteacher George P. Davison, right, privately agreed the school is now ‘demonizing white people for being born’. He said he decided to come forward because he could no longer stay silent while ‘witnessing the harmful impact’ that anti-racism instruction has on children. His firing comes in the wake of a second controversy that impacted another elite NYC school where a parent complained their child was being brainwashed. Andrew Gutmann, 45, had announced in an April 13 letter shared by Bari Weiss this week that he has chosen not to re-enroll his daughter at Brearley school.