Ben Carson says the push for equity with reparations and anti-poverty stipends is ‘un-American,’ ‘racist’ and ignores poor white families 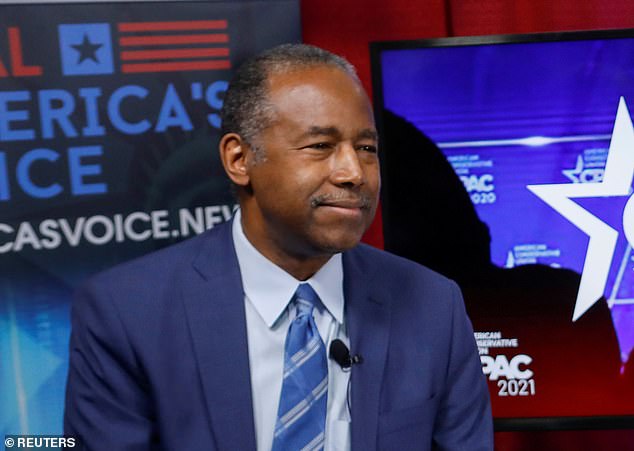 Ben Carson argued in a new op-ed that the push for racial equity – using tools like reparations and ‘anti-poverty’ stipends – can lead to more racism and is ‘un-American.’

‘Proponents of equity see no problem with treating groups of people differently based solely on race, as long as it serves their agenda,’ Carson wrote Sunday in The Washington Post. ‘This is what we used to call racism, and those not blinded by identity politics still recognize it as such.’

As examples, Carson pointed to the House Judiciary Committee passing Rep. Sheila Jackson Lee’s bill to study reparations for descendants of slaves and an Oakland, California initiative that gives anti-poverty stipends to resident who are ‘BIPOC’ – black, indigenous or people of color.

Oakland’s Mayor Libby Schaaf announced in March a privately funded program that gives $500 a month to low-income families of color, giving them no rules on how to spend it.

Last week, the House moved H.R. 40 – which would form a commission to study reparations – out of committee for the first time in the resolution’s 32-year history.

An estimated 40 million black Americans could receive some sort of payment to the tune of trillions of dollars.

The reparations bill isn’t guaranteed to see a vote on the House floor – and has an even less likely chance of getting attention in the Senate.

Ten Republicans would need to support it in order to survive a filibuster.

Carson argued that ‘those alive today are not culpable for misconduct that took place long before they were born’ adding ‘it would be unjust to hold them responsible for it.’

He said it was also unjust to give benefits to people who weren’t actually the victims of the misdeeds.

Additionally, Carson argued distributing government benefits to a group based on race or gender is ‘guaranteed to produce resentment among the disfavored group.’