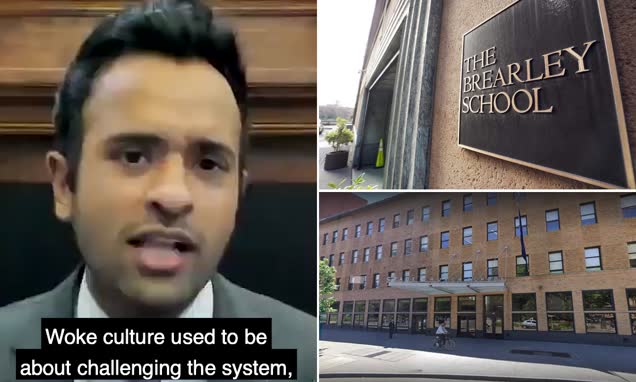 American schools are ‘going down the tubes’ because they have been ‘infected’ with ‘woke culture’ that has ‘sacrificed the idea of excellence’ by ‘indoctrinating’ students, according to a leading critic. Vivek Ramaswamy (left) spoke out in response to two separate controversies that impacted elite New York City prep schools where parents complained their children were being brainwashed with anti-racism ideology. Ramaswamy, a biotech entrepreneur and the author of Woke, Inc, compared the wave of ‘wokeness’ in schools to China’s Cultural Revolution of the 60s and 70s, when the people were indoctrinated with Maoism by the Communist Party. His comments came just days after a father removed his daughter from an elite, all-girls Manhattan private school, Brearley (top right), that counts Tina Fey and Drew Barrymore among its parents. Last week, a math teacher went public with his complaints that another elite New York City prep school, Grace Church School (bottom right), was indoctrinating students with anti-racism ideology.