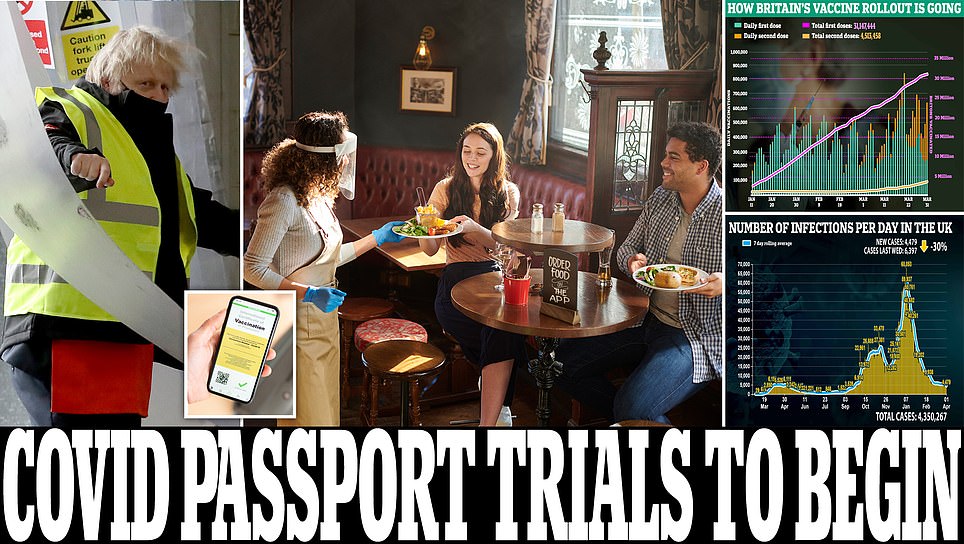 Covid passport trials to begin: Boris Johnson is set to unveil a test scheme for venues on
Trials of vaccine passports (concept pictured bottom-left inset) could begin as early as next month, the Mail has revealed, with theatres and stadiums being lined up to pilot the controversial scheme under plans discussed by ministers. The passports could also be used eventually in pubs, restaurants, nightclubs and cinemas. The pilot scheme will begin after work is completed on an updated version of the NHS Covid app which will let users prove they have been vaccinated. The plan is a sign Boris Johnson will give vaccine passports the go-ahead on Monday, when he is due to report the interim results of a study led by Michael Gove. But their introduction is certain to trigger a huge political row. Last night 72 MPs – including libertarian Tories and senior Labour figures – issued a joint statement branding vaccine passports ‘divisive and discriminatory’ and vowing to oppose them. This threatens a major headache for the Prime Minister if he needs legislation to bring the scheme in. Yesterday, the Prime Minister dropped a further hint he has come round to the idea, saying vaccine passports could help to provide ‘maximum confidence to businesses and customers’. He stressed any scheme would also allow people to show a negative test result or proof they already have Covid antibodies. Speaking (pictured left) on a visit to Middlesbrough, the PM said vaccine passports now looked inevitable for foreign travel. But he suggested they would also have a ‘useful’ role to play domestically. Right: Graphs showing the number of people vaccinated in the UK per-day (top) and daily news Covid-19 infections (bottom).