WATCH: Fort Jackson Drill Sergeant is charged with assault after he is caught on video shoving black man inside South Carolina gated community and telling him: ‘You came to the wrong neighborhood ************’ 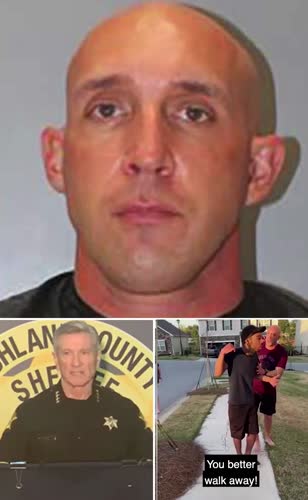 A Fort Jackson Drill Instructor has been charged with third degree assault after shoving a black man and telling him: ‘You came to the wrong neighborhood motherf*****’. Jonathan Pentland, 42, was charged Wednesday after accusing his victim of ‘hanging around’ a South Carolina gated community, Richland County Sheriff Leon Lott told reporters. Pentland had been quickly identified after the Monday video went viral showing his altercation with the young man at the Lakes at Barony Place – a gated community in Richland County located in the Summit neighborhood. ‘You’re in the wrong neighborhood,’ he tells the victim, identified only as Deandre. ‘I ain’t playing with you. … I’m about to show you what I can do.’ If found guilty Pentland faces 30 days in jail and a $500 fine. He is listed as detained in the Richland County jail and issued a personal recognizance bond, according to online jail records, which did not show him as having an attorney. Photos show that Pentland has been a drill sergeant at Fort Jackson in South Carolina since at least 2019. Fort Jackson Commanding General Brig. Gen. Milford Beagle, Jr, took to Twitter to announce that the video would be investigated.