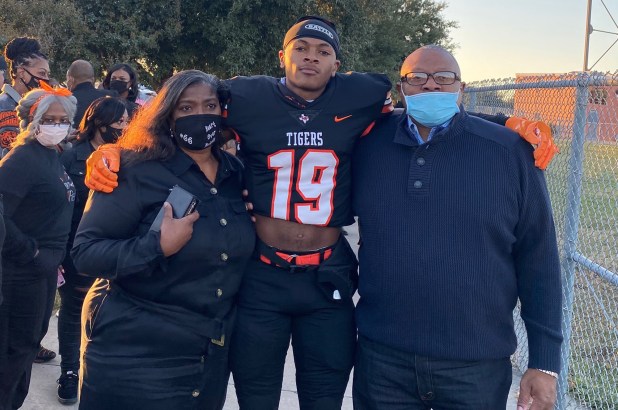 A promising college football recruit was fatally shot at a hotel in Dallas, police and relatives said.

Tony Evans Jr., a 17-year-old senior wide receiver at Lancaster High School in Texas, was pronounced dead at a hospital after he was wounded early Sunday inside a room at the Hawthorn Suites in Dallas, police said in a statement.

Evans, who was set to join the University of Wyoming’s football team next season, was gunned down by an unknown suspect inside Room 221 at the hotel. A motive in the slaying is unclear, police said.

Another person who was not identified by police was also shot during the incident, the Dallas Morning News reported. That victim was in stable condition, the newspaper reported Sunday.

Evans’ mother, Aretha Evans, told the newspaper her son was a devout Christian who was determined to succeed on and off the football field.

“We are on an emotional roller coaster,” Evans told the newspaper. “Our son’s life was abruptly ended. We have been left broken-hearted. Pray for us to have strength as we prepare to lay our beloved Tony Evans Jr. to rest.”

Evans, who was raised in Lancaster, tallied 13 catches for 268 yards and four touchdowns at Lancaster High School last season. He was prepping to join the Wyoming Cowboys after signing a letter of intent in February, the Dallas Morning News reported.

“He wanted everything to work out,” Evans’ friend Rodney Hudson told the newspaper. “And he was going to have a breakout season. That’s what he did. Whatever he told me, he did.”

Hudson said the outgoing, funny teen left a mark on whomever he met.