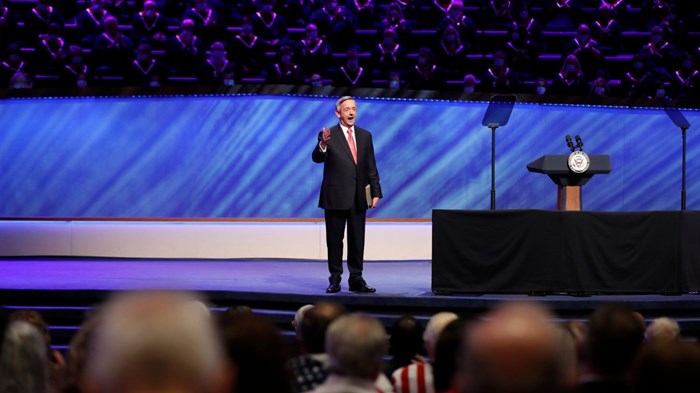 The president of the Southern Baptist Convention posted a photo on Facebook last week of him getting the COVID-19 vaccine. It drew more than 1,100 comments—many of them voicing admiration for J. D. Greear, and many others assailing him.

Some of the critics wondered if worshippers would now need “vaccine passports” to enter The Summit Church in Durham, North Carolina, where Greear is pastor. Others depicted the vaccines as satanic or unsafe, or suggested Greear was complicit in government propaganda.

The divided reaction highlighted a phenomenon that has become increasingly apparent in recent polls and surveys: Vaccine skepticism is more widespread among white evangelicals than almost any other major bloc of Americans.

In a March poll by The Associated Press-NORC Center for Public Affairs Research, just 18 percent of Americans who consider themselves born-again or evangelical have gotten the vaccine, compared to 29 percent of the rest of the population.

The poll found that many white evangelical Protestants aren’t planning on ever getting the shot. Forty percent said they likely won’t get vaccinated, compared with 25 percent of all Americans, 28 percent of white mainline Protestants, and 27 percent of nonwhite Protestants.

The findings have aroused concern even within evangelical circles. The National Association of Evangelicals, which represents more than 45,000 local churches, is part of a new coalition that will host events, work with media outlets and distribute various public messages to build trust among wary evangelicals.

“The pathway to ending the pandemic runs through the evangelical church,” said Curtis Chang, a former pastor and missionary who founded ChristiansAndTheVaccine.com, the cornerstone of the new initiative. With white evangelicals comprising an estimated 20 percent of the US population, resistance to vaccination by half of them would seriously hamper efforts to achieve herd immunity, Chang contends.

Jeffress believes a majority of his congregation at First Baptist Dallas welcome the vaccines, while some have doubts about their safety or worry they have links to abortion. Jeffress is among numerous religious leaders who say the leading vaccines are acceptable given their remote, indirect links to lines of cells developed from aborted fetuses.

Moore expressed hope that SBC pastors would provide “wise counsel” to their congregations if members raise questions about vaccinations.

“These vaccines are cause for evangelicals to celebrate and give thanks to God,” he said via email. “I am confident that pastors and lay members alike want churches full again and vaccines will help all of us get there sooner rather than later.”