Tunwin, who emigrated with her family from Myanmar in the early 2000s, had been closely following news of protests against the military coup in her home country and was angered at the violence she saw.

“I just could not take it anymore,” she said.

So Tunwin, a member of the Karen ethnic group who belongs to a Baptist church in Minnesota, started praying. Then she got to work.

One of her first calls was to church leaders in the Karen Baptist community in the United States. Then she began to call leaders from other Burmese ethnic immigrant groups around the country, asking for help in organizing a protest against the military. The 33-year-old Tunwin, who described herself as just an ordinary person, said leaders kept giving her the same answer.

In February, Myanmar’s military, known as the Tatmadaw, seized power in the country. The country’s leader, Daw Aung San Suu Kyi, and other political leaders were arrested. Hundreds of people have been killed and thousands detained since the coup, which has been met with massive civilian protest.

On Saturday (April 10), Tunwin and other organizers plan to meet in Washington, D.C., for a mass protest against the coup in Myanmar. Organizers expect about 800 to 1,000 participants at Saturday’s protest, including groups from churches in New York, Minnesota and about nine churches in the Washington, D.C., area.

M Tu Aung, general secretary of the Nationalities Alliance of Burma (USA) and a coalition of immigrants from Myanmar, from the Kachin, Karen, Karenni, Mon, Rakhine and Shan ethnic groups, has helped organize the event.

Aung is also a leader in the Kachin Baptist Convention, which has a large presence in Myanmar. Among the first missionaries from the United States were Adoniram and Ann Judson, who went to Myanmar in the early 1800s. Originally Congregationalist, the Judsons became Baptists during their long voyage from the United States, according to the Southern Baptist Convention’s International Mission Board. Baptists have become one of the largest Christian groups in Myanmar, especially among the country’s ethnic minorities. 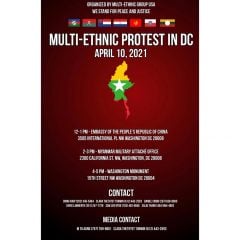 A protest is scheduled for Saturday in
Washington D.C. to speak out against
continued violence in Myanmar.

Aung said the coalition represents about 200,000 ethnic immigrants from Myanmar in the United States, most of them Christian. He said the group is concerned about the current political crisis in Myanmar as well as the longterm political and humanitarian crisis in the country.

Aung said protesters want to show their support for opponents of the coups and call for action to end the violence in the country.

“We call for the release of all who have been unlawfully detained and an end to unlawful night raids, arrests, detentions and break-ins,” Aung said. “We ask for strong action from the international community to stop these atrocities.”

Protesters will begin their demonstration at noon on Saturday (April 10) outside the Chinese Embassy and then will protest outside the Myanmar Naval & Air Attache office on California Street NW, before ending at the Washington Monument late in the afternoon.

Ethnic minorities in Burma, like the mostly Christian Karen people and the Muslim Rohingya group, have long been targets of Myanmar’s military. Thousands of ethnic minorities have been displaced from their homes due to the ongoing conflict between the government and ethnic minority resistance groups, which began in the 1950s.

Aung said the Nationalities Alliance of Burma, which was started in 2019, has tried to unite Myanmar immigrants from different groups together in support of democracy and human rights.

He said the “multiethnic Burmese diaspora” in the United States denounces the coup and the ongoing violence in the country.

“We are horrified, angry, frustrated and deeply concerned about military attacks on civilians,” he said. “We stand with the people of Myanmar in the struggle for peace and justice, and we are in support of our brothers and sisters in Myanmar in their demonstrations, protests and civil disobedience.”

Tunwin said local churches in the D.C. area will provide food and other logistical support for protesters. And she is glad to see people from a variety of Burmese ethnic groups working together.

She also said many immigrants from Myanmar left the country because their communities have been under attack for decades, so they understand what people in the country are going through in the recent coup.

“People are just so very fed up, and everybody’s just coming together,” she said. “It’s going to be a long fight, but everyone is united and doing what they can right now.”