Piers Morgan: Khloé Kardashian’s horror at the public finding out how she really looks lays bare how her family have built a cynical multi-billion dollar empire from the exploitation of fake views 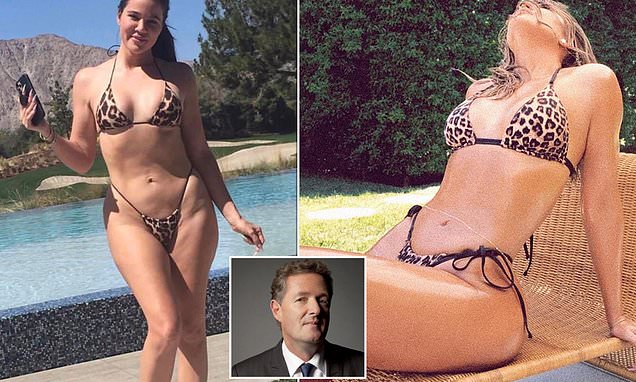 I didn’t think there was anything left in the world of the Kardashians that could possibly shock me. Not even today’s revelation that Kim Kardashian has followed her sister Kylie Jenner in becoming a Forbes-confirmed billionaire. But I was wrong. The photo of Khloé Kardashian in a leopard print bikini (left) that’s gone viral this week is truly jaw-dropping. Because it’s real. It’s Khloé unvarnished, flaws and all. And the photo was utterly horrifying. Not to me, I hasten to add. I thought she looked as refreshingly normal as I’ve ever seen any of the Kardashians. No, it was utterly horrifying to HER. For it turns out the very last thing the Kardashians want is for anyone outside the family to ever see what they really look like. In the last three weeks, Khloé has posted 12 photos of herself in bikinis on her Instagram, mostly to promote her lucrative new swimwear line. Those images have all been substantially worked on to create a sense of aesthetic perfection (right). The reason the Khloé fakery matters is that so many impressionable young girls and woman strive to look like the way they think the Kardashians look, from recklessly starving themselves to get the same fake waists, to paying plastic surgeons to irreparably nip and tuck their faces. How much inspiring it would be if Khloé stopped trying to ban people from using the photo – and instead, owned, embraced and celebrated it.