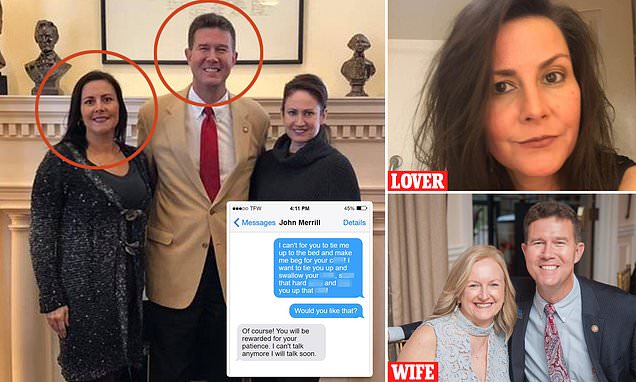 Alabama’s secretary of state said he will not seek a US Senate seat after he admitted to having an affair with a woman who released racy texts and audio describing their sexual encounters when he tried to break off the tryst. John Merrill, a Republican, acknowledged that he carried on a three-year extramarital affair with Cesaire McPherson, a 44-year-old legal assistant from Montgomery, from November 2017 until November 2020. McPherson revealed the affair to the online blog National File. She described in vivid detail her sexual encounters with the secretary of state in his marital bed. On at least one occasion, she recorded the two of them having sex. McPherson said that she initiated the relationship with Merrill by contacting him through social media. Merrill is seen bottom right with his wife, Cindy Benford Merrill, in a November 2019 photo. McPherson and Merrill are seen circled in the lefthand photo at the State Capitol in November 2018 – a year after the affair started.