Georgia restaurant defends calling police on dinner party claiming 52 people showed up to reservation for 25 and then threatened not to pay when staff couldn’t split their $2,200 bill 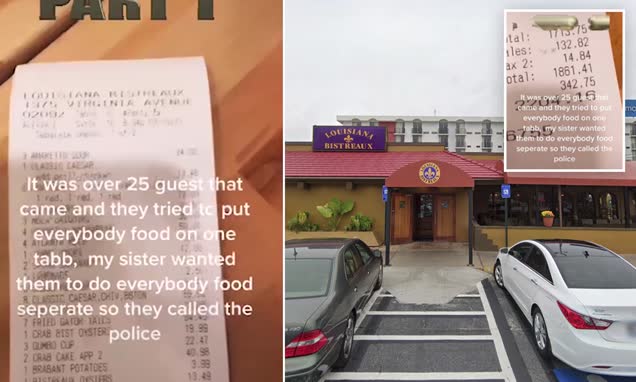 A local restaurant in Georgia has defended calling the police on a large dinner party after it allegedly refused to split the table’s $2,200 bill into separate checks. The awkward incident unfolded at Louisiana Bistreaux Seafood Kitchen in East Point, Georgia where a group of around 25 people were celebrating a woman’s 30th birthday. The March 10th event ultimately ended in a dispute and with a visit from the cops after the restaurant put the party’s bill on a single tab and refused to break it down into individual checks. Louisiana Bistreaux addressed the controversy Saturday in a statement to DailyMail.com, saying the confusion was largely due to the fact that more than two dozen extra guests ended up showing up to the party. ‘While the incident on March 10th is unfortunate, not mentioned in this report, reservations that were made was for 25 people and per our contractual agreement one bill would be presented to the host, 52 guests showed,’ the restaurant’s marketing director Wendy Smith said.