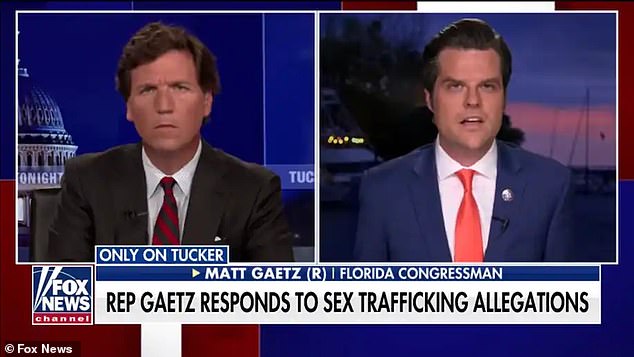 Fox News host Tucker Carlson was stunned by Rep Matt Gaetz’s appearance on his show Tuesday night, calling it one of the ‘weirdest interviews’ ever.

Gaetz had on Tuesday claimed he is the victim of a $25million extortion plot after the New York Times revealed he is under investigation for sex trafficking over allegations he had a sexual relationship with a teenage girl, 17, and paid to have her travel with him. During the interview Gaetz denied all of the allegations against him.

‘It is a horrible allegation and it is a lie,’ he told Carlson. ‘The New York Times is running a story that I have traveled with a 17-year-old woman and that is verifiably false. People can look at my travel records and see that that is not the case.’

When asked about the alleged sexual relationship with the teen, Gaetz said such a person ‘doesn’t exist’.

However, Gaetz recalled a dinner with Carlson, his wife and ‘a friend of mine’ who he said has since been ‘threatened’ by authorities to ‘cop to the fact that somehow I was involved in some pay for play scheme’.

‘I can say that actually you and I went to dinner about two years ago, your wife was there and I brought a friend of mine, you will remember her,’ he said. ‘And she was actually threatened by the FBI, told that if she wouldn’t cop to the fact that somehow I was involved in some pay for play scheme that she could face trouble and so I do believe that there are people at the Department of Justice who are trying to smear me.’

In response to that claim, Carlson says: ‘I don’t remember the women you’re speaking of or the context at all honestly.’

Following the segment, Carlson told his viewers: ‘You just saw our Matt Gaetz interview. That was one of the weirdest interviews I’ve ever conducted.’

‘That story just appeared in the news a couple of hours ago, and on the certainty that there’s always more than you read in the newspaper, we immediately called Matt Gaetz and asked him to come on and tell us more. Which, as you saw, he did. I don’t think that clarified much, but it certainly showed this is a deeply interesting story and we’ll be following it,’ Carlson added.

Gaetz, a prominent conservative in Congress and a close ally of former President Donald Trump, is under investigation to determine if he violated federal sex trafficking laws.

The probe has been underway for nearly a year and Gaetz, who represents parts of western Florida, has been aware for months that he was under investigation, the person familiar with the matter told the Associated Press.