Here we go: Our Christian brother Kevin Durant is apparently against the abomination of homosexuality as he should be, however if this is in fact Kevin Durant saying these vile and profane words he is wrong for doing that 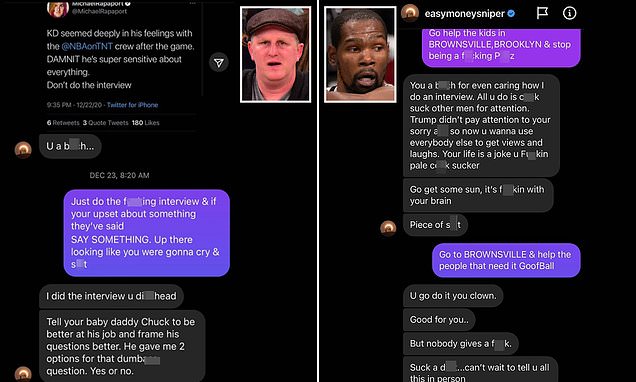 Actor and podcaster Michael Rapaport has revealed a private war of words with Kevin Durant in which the Brooklyn Nets star unleashed a string of homophobic slurs while threatening to spit on the diehard 51-year-old New York sports fan.

Screen grabs of the private, online conversation were revealed by Rapaport in a tweet on Tuesday afternoon. The disagreement appears to have started in December after Rapaport criticized an awkward post-game interview Durant had on TNT.

‘I receive threats and disgusting messages DAILY, but never in my wildest dreams did I think [Kevin Durant] would be among them,’ Rapaport tweeted Tuesday while posting grabs of his December exchange with Durant. ‘The [snake emoji] himself is now threatening me, bringing up my wife and wants to fight. This is supposed to be America’s sweetheart right?’

The revelation was made a day after a federal judge dismissed a defamation lawsuit Rapaport filed against Barstool Sports and its founder Dave Portnoy over a t-shirt depicting the actor with a case of herpes. Interestingly, Durant referenced that lawsuit in one of the Instagram attacks he launched at Rapaport in December.

‘Your wife mad as f*** cuz u wasting that little bit of money on a lawyers cuz u can’t take a joke,’ Durant wrote in a direct message to Rapaport.