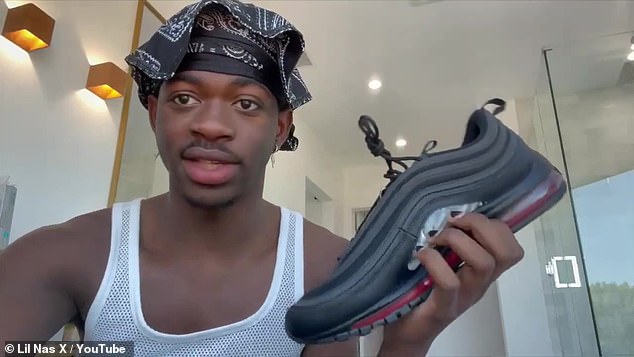 Lil Nas X took to YouTube on Sunday with a tongue-in-cheek ‘apology’ to critics over his newly-unveiled footwear line, Satan Shoes.

The musician, 21, who titled the clip Lil Nas X Apologizes for Satan Shoe, was blasted for releasing his much-talked-about design, which contains human blood in the soles of the items.

‘I just want to come forward and say…’, the Atlanta native said, before the clip switched to a lap dance scene from his video for his new single Montero (Call Me By Your Name) – which has also been slammed for its ‘Satanic’ themes.

The Old Town Road singer worked on the limited edition shoes – which have a pentagram symbol on them – with the company MSCHF.

Lil Nas X, whose full name is Montero Lamar Hill, will put up approximately 666 pairs of the shoes for sale on Monday.

MSCHF reps told NBC News that company employees donated blood to insert into the sole of each individual shoe.

The style of the shoe is reportedly derived from Nike Air Max ’97, but the sneaker giant denied any involvement with the production of the customized shoe.