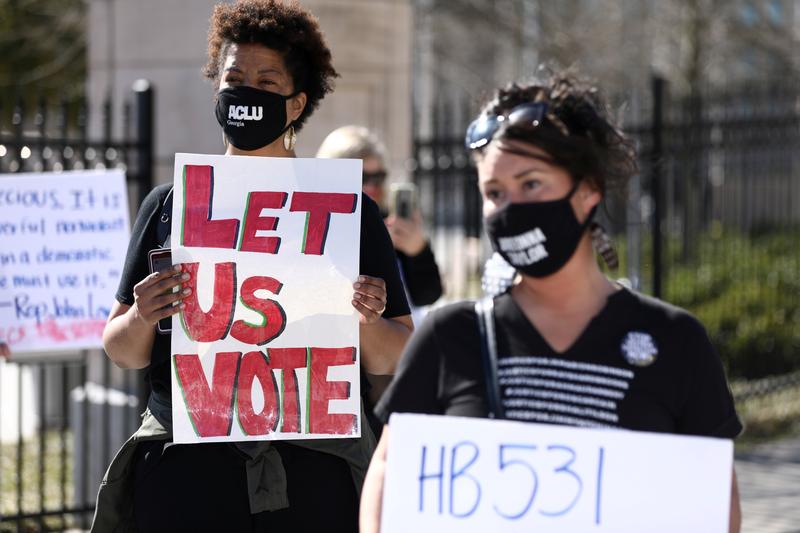 Georgia’s sweeping new voting restrictions came under attack on Friday, with civil rights groups challenging them in court and President Joe Biden saying the U.S. Justice Department was examining what he called an “atrocity” of a law.

Among other limits, the Republican-backed law enacted on Thursday imposes stricter identification requirements, limits drop boxes, gives lawmakers the power to take over local elections and shortens the early voting period for all runoff elections. It also makes it a misdemeanor for people to offer food and water to voters here in line, in a state where people sometimes wait for hours in the heat to vote.

The legislation has alarmed Democrats, who just months ago celebrated historic wins in the presidential election and two Senate campaigns in Georgia that helped deliver the White House and U.S. Senate control to their party in Washington.

Biden, the first Democratic presidential candidate in three decades to win Georgia, on Friday accused Republicans there and in other states of mounting a broad assault on voting rights.

“It’s an atrocity,” Biden told reporters, shortly after comparing the restrictions for a second straight day to racist “Jim Crow” laws, which were put in place in Southern states in the decades after the 1861-65 U.S. Civil War to legalize racial segregation and disenfranchise Black citizens.

Biden said it was unclear what, if anything, the White House could do to address the law but added that the Justice Department was “taking a look.” He again urged Congress to pass Democratic-backed legislation that would require automatic registration, expand absentee voting and temper voter ID laws.

Thus far, Republican opposition in the U.S. Senate has stymied that effort.

A coalition of civil rights groups sued the state in Atlanta federal court just hours after Republican Governor Brian Kemp signed the legislation into law on Thursday, arguing that the measures are intended to make it harder for people – particularly Black voters – to cast ballots.

“These provisions lack any justification for their burdensome and discriminatory effects on voting,” the lawsuit said.

“There is nothing ‘Jim Crow’ about requiring a photo or state-issued ID to vote by absentee ballot – every Georgia voter must already do so when voting in-person,” he said. “President Biden, the left, and the national media are determined to destroy the sanctity and security of the ballot box.”

Other Republican-controlled state legislatures are pursuing voting restrictions in election battleground states, including Florida and Arizona, after former President Donald Trump repeatedly blamed his loss to Biden on massive voter fraud without evidence.

Democrats and voting rights advocates have said the restrictions, which passed the Georgia legislature solely with Republican support, will further harm voters in minority communities that are already plagued by long lines and inadequate election infrastructure.

As he contested his national loss to Biden, Trump focused much of his energy in Georgia. At one point, he personally called the state’s Republican secretary of state, Brad Raffensperger, and urged him to “find” votes Trump claimed had gone missing.

That phone call is part of a criminal investigation by state prosecutors into whether Trump broke election laws by pressuring officials to alter the results.

In a statement on Friday, Trump applauded Georgia Republicans for their action.

“They learned from the travesty of the 2020 Presidential Election, which can never be allowed to happen again,” he said.

Trump’s false assertions about voter fraud have reinforced long-standing Republican warnings that stricter laws are needed, despite research showing that such cases are vanishingly rare.

In a Reuters/Ipsos poll in February, 62% of Republicans said they were “very concerned” that elections were tainted by ineligible people casting votes. Weeks before the election in October, 47% of Republicans expressed the same level of concern.