‘You are being less transparent than the Trump administration’: Fox News’ Chris Wallace bashes Jen Psaki for refusing to allow reporters into southern border detention facilities 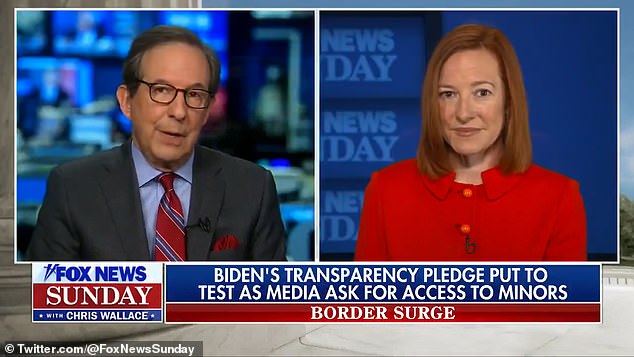 Chris Wallace accused Joe Biden’s administration of being ‘less transparent’ than Donald Trump as he hammered White House Press Secretary Jen Psaki on Sunday for refusing to allow media access to holding facilities at the border.

‘At this point, in terms of allowing access to border patrol facilities for reporters, you are being less transparent than the Trump administration,’ the ‘Fox News Sunday’ host said in an interview with Psaki Sunday morning.

Wallace is one of the hosts on the right-leaning network who is critical of Trump’s time in office.

Psaki deflected, instead blaming former President Trump for the growing border crisis and reasserting the administrations ‘commitment’ to transparency to the press and public at the detention facilities.

‘The Trump administration was turning away kids at the border, sending them back on the treacherous journey, or they were ripping kids from the arms of their parents,’ Psaki responded to Wallace. ‘We’re not doing that.’

She added: ‘We are committed to allowing cameras into the border patrol facilities, absolutely.’

When Wallace pushed Psaki when that access would be granted, she repeated they are ‘committed’ to transparency, but did not present a timeline.