Writing for the first time about his dramatic exit from GMB after saying he didn’t believe Meghan’s ‘truth’ on racism and the Royals, Piers Morgan defends free speech – and says the silent majority hate the tyranny of woke 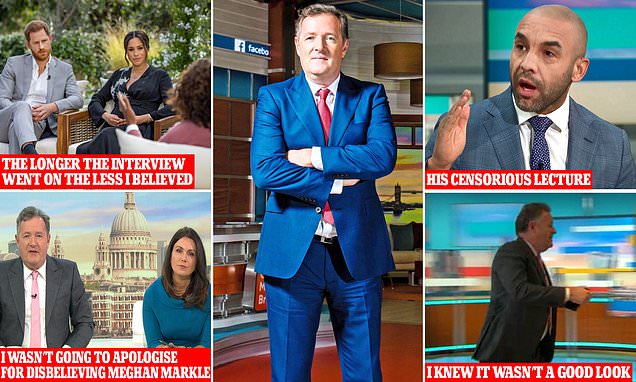 A NUCLEAR BOMB DROPPED ON THE ROYALS

Got to the Good Morning Britain studios at 4am to watch Oprah Winfrey’s much-hyped interview with Prince Harry and his wife Meghan which just finished airing in the US.

Ninety jaw-dropping minutes later, I raced round to Susanna Reid’s dressing room and we exclaimed in unison: ‘My God…’

The Duke and Duchess of Sussex just dropped a nuclear-sized scandal bomb into the very heart of the Royal Family.

Their shocking claims of racism at the Palace concerning their son Archie, and an alleged refusal by Royal staff to let Meghan receive treatment for suicidal thoughts in case it hurt the Royal brand, are so incendiary that they could inflict irreparable damage on the Monarchy.

But were they true?

The longer the interview went on, the less I believed.

For example, Meghan said she and Harry got secretly married three days before their wedding, in a tiny service officiated by the Archbishop of Canterbury.

Really? So, the marriage we all watched was a sham? And Britain’s most senior clergyman was in on it, performing an illegal ceremony in a garden?

Equally implausible was Meghan’s insistence she never checked out Harry online when they first met or had much interest in his family (her old friends previously revealed how fascinated she’d been with the Royals and Diana in particular), and her claim that her passport was taken away. How then did she make all her endless foreign trips?

But far more serious was the sensational implication that Archie was barred from being a Prince because of his skin colour.

It sounded complete nonsense when she said it, and it is; he’s not a Prince because, technically, the great grandchildren of the Monarch are not bestowed with titles ‘Prince’ or ‘Princess’ unless they’re in the direct line to the throne.

This rule applies regardless of the child’s mother’s ethnicity.

So, the most serious assertion, one that has already sent racially charged America into a tailspin of outrage, was a falsehood presumably designed to cause maximum harm to the Royals.

And for all their guff in the interview about supporting the Queen, it’s the Monarch who decides such titles so they were effectively accusing Harry’s grandmother and Britain’s Head of State of being racist.

This was a disgraceful betrayal, as was Meghan’s attack on the Duchess of Cambridge for making her cry (Kate’s never said a bad word about her sister-in-law in public), Harry’s bleating about his father supposedly cutting off his money supply and security, and their sustained bitter attack on the Royal institution whose titles they greedily exploit for massive commercial gain.

I expected such disingenuous. self-serving wrecking-ball stuff from a social-climbing Hollywood actress like Ms Markle, but for Harry to publicly shred his family and the Monarchy like this, while Prince Philip was seriously ill in hospital, is so out of character for a man who once bravely served his Queen and country in war. He can’t be happy doing this, surely?

‘I’m angry to the point of boiling over,’ I raged when we got on air. ‘I’m sickened by what I’ve just had to watch.’

‘OK,’ said Susanna, ‘but some people might be upset and moved by what they’ve just heard.’

She cited Meghan’s mental health claims, and replayed the clip of her saying: ‘I just didn’t want to be alive any more… I went to the institution and said I needed to go somewhere to get help and I was told that I couldn’t because it wouldn’t be good for the institution.’ This seemed utterly incredible to me.

We’re supposed to believe Meghan Markle told Palace aides she was suicidal and desperately needed help, but was informed she couldn’t have any because it might be bad for the Royal brand?

And if she was suicidal, then why didn’t Harry get her the urgent help she needed?

He’s attached to some of Britain’s biggest mental health charities and has proudly spoken of getting discreet help for himself in the past.

‘OK,’ I said, ‘let’s have the names. Who did you go to, what did they say to you?’ Then I made a more general observation: ‘I’m sorry, I don’t believe a word she says.’

‘Well, that’s a pathetic reaction to someone who’s expressed those thoughts,’ snapped back Susanna.

But it was an honest reaction, not to whether she was feeling suicidal – only she knows how she felt – but to the idea that she was banned from getting treatment.

It was also reflective of my general sense of disbelief about the whole interview; once you know someone’s lying about some things, how can you believe anything else they’re saying without hard evidence to support it?

I wasn’t the only one feeling this way.

Later in the show, black British Army war hero Sergeant Johnson Beharry – the last person to win the Victoria Cross – said of the other racism claim, that a Royal spoke derogatorily to Harry about what skin colour Archie might have: ‘I don’t believe that happened.

‘If it happened, then why don’t they explain it? Who said it, where did it happen?’

But other black guests attacked me for questioning Meghan’s word, using my own skin colour as a weapon.

Dr Shola Mos-Shogbamimu called me a ‘liar’ and a ‘disgrace’ and said: ‘You constantly use your platform as a wealthy white privileged man with power and influence to aggravate and escalate the bigoted, sexist, racist and misogynist attacks on Meghan Markle.’

Trisha Goddard branded me a ‘bully’ and said: ‘Sorry Piers, you don’t get to call out what is and isn’t racism to black people.

‘You can call out all the other stuff you want, but leave the racism stuff to us, eh?’

So, because I’m white, I’m not allowed to doubt the validity of Meghan Markle’s two racism claims against the Royal Family, one of which has already been proved to be based on a lie?

It was the fieriest ever episode of Good Morning Britain, but very raw, real television too.

It’s what we do best, passionately debating the news just as families, friends and work colleagues will doubtless be doing today about the interview.

Soon, the hashtag #AbolishTheMonarchy was trending on Twitter, an indication of just how damaging the Sussexes’ claims have been.

I was trending too, with people saying I was ‘racist’ and ‘mocking mental illness’ by disbelieving Meghan’s claims, and demanding I be fired.

It didn’t matter that I’ve never said anything racist about her or that my only comments about her race have been to repeatedly say how great it was that a bi-racial woman married into the Royal Family.

No, it appears that questioning Meghan’s fork-tongued ‘truth’ is now a racist hate crime.

Whereas her spray-gunning her family on global TV, just as she allegedly spray-gunned her young female Palace staff who’ve accused her of serious bullying, is a brave victim finally finding her silenced voice.

Meghan’s had no worse media treatment than other Royal brides such as Diana, Fergie, Kate, Camilla or even that other Monarchy-rattling American divorcee, Wallis Simpson.

But she’s the first to claim negative press has been motivated by racism, and it’s a very dangerous charge to make with so little to back it up.

The clearly orchestrated social media pile-on against me intensified through the afternoon.

I’ve always subscribed to the ‘if you dish it out, you’ve got to take it’ philosophy.

But my three sons told me they too are all being targeted, and sent me screenshots of venomous abuse and threats of violence towards them, which made my stomach churn, especially as police are already investigating a death threat made to me and my eldest boy Spencer last month.

None of them even care about Meghan Markle, let alone agree with my views on her. Yet the Twitter troll mob has found them guilty by association.

One troll vowed to murder me in front of them, and added: ‘When your dad dies, the world will have a party.’

To compound my unease, the mental health charity Mind – which gave me an award in 2012 for promoting mental health issues in Life Stories interviews with troubled stars such as Frank Bruno and Paul Gascoigne – issued a statement saying it was ‘disappointed and concerned to see Piers Morgan’s comments on not believing Meghan’s experiences about suicidal thoughts’.

It ended with the ominously threatening words: ‘We are in conversations with ITV about this.’

ITV asked me to clarify what I meant on tomorrow’s show, which I’m happy to do as it’s been deliberately misconstrued to suggest I don’t think victims of mental illness should be believed.

I was told I didn’t need to apologise.

Alex Beresford, GMB’s occasional stand-in weatherman, messaged me saying I needed to better understand Meghan Markle’s racism claims from the perspective of mixed-race people like himself.

I told the team to get him in tomorrow so we can debate it on air.

WHY I WAS LEFT WITH NO CHOICE BUT TO QUIT

A bad night of broken sleep.

It’s been a strange, stressful 12 months for everyone, and I’ve been in the thick of all the increasingly toxic debates – whether about the pandemic, or those other hot-button issues of Brexit, Trump and the Sussexes.

Normally, I revel in the noise. But unregulated social media, as anyone in the public eye will confirm, has got increasingly vicious and nasty.

When we got on air, I was tired and agitated.

‘I understand that you don’t like Meghan Markle,’ he said, ‘you’ve made it so clear a number of times on this programme.

‘I understand you’ve got a personal relationship with Meghan Markle or had one and she cut you off… she’s entitled to cut you off if she wants to.

‘Has she said anything about you since she cut you off? I don’t think she has, but yet you continue to trash her…’

As he delivered his censorious lecture, implying my only motivation for disbelieving Ms Markle’s outlandish interview claims was because she ‘ghosted’ me four years ago after we’d been friendly for 18 months – I genuinely couldn’t care less about that, but it was informative as to her character, especially when I saw her do the same thing to many other people, including her own father – I felt the steam rising inside me.