‘Is this patriot enough?’ 69-year-old Chinese immigrant Army veteran and West Chester trustee shows off scars from his 20 years in the US military in response to people who say he ‘doesn’t look American’ amid a surge in hate crimes against Asian-Americans 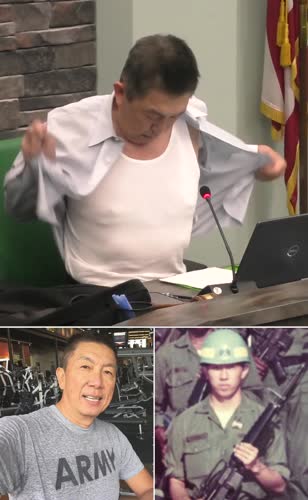 Lee Wong, 69, a Board of Trustees member in West Chester Township, Ohio, lifted up his shirt to display the results of fighting for the U.S. Army amid growing anti-Asian violence. Wong served in the army for 20 years after immigrating to the United States over five decades ago. The Republican has also campaigned in a ‘Make America Great Again’ hat, suggesting he’s a supporter of Donald Trump. Wong is a 20-year veteran who immigrated to the United States from China 51 years ago at age 18. Wong served from 1975 to 1995, and sustained the injury at Fort Jackson in South Carolina. He also says that when he moved to the US he was attacked because someone mistook him as Japanese and has been subjected to Anti-Asian harassment.