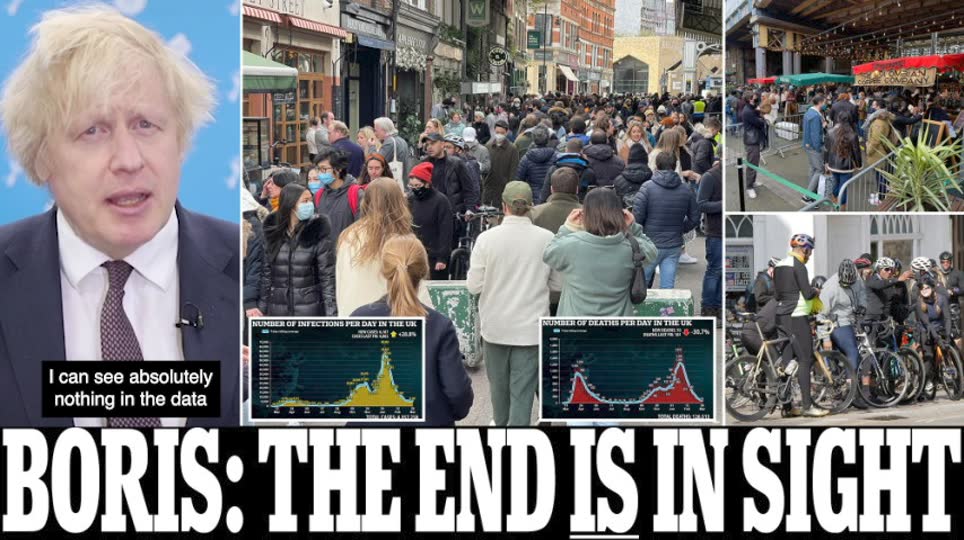 The Prime Minister (left, at the Conservatives’ virtual spring forum today) said he can see nothing in the data to dissuade him from continuing along his roadmap, which would mean no curbs from June 21. But he urged people to remain vigilant, adding there are still unanswered questions about what impact the third Covid wave sweeping Europe would have on the UK. Meanwhile lockdown-weary Britons threw caution to the wind and left their homes as temperatures started to climb today. Families, joggers and weightlifters flocked to parks and beaches across the country as the UK (bottom right, Windsor, and top right and centre, Borough Market, London) braced for near-record 76F (24C) heat next week. Amateur athletes raced along the banks of Queensmere Pond in Wimbledon Common, south west London, while walkers strolled hand-in-hand elsewhere on the grounds. Greenwich Park in the south east of the capital was rammed with sunseekers from early this morning, with dogwalkers and runners weaving past each other near the Royal Observatory. Temperatures will start to climb today and hit 52F (11C) by lunchtime, the Met Office says, before peaking at 55F (13C) tomorrow. Despite the sun in the south, Cumbria was spattered with a blanket of snow this morning, with the A66 in Brough surrounded in white. Ahead of the easing of restrictions on ‘Happy Monday’, police chiefs warned the public to stay vigilant and said next week is not the end of curbs on freedom. Martin Hewitt, chairman of the National Police Chiefs Council, said complacency risked spreading new Covid variants and could lead to fresh rules.