Icelandic Volcano Could Erupt for Years 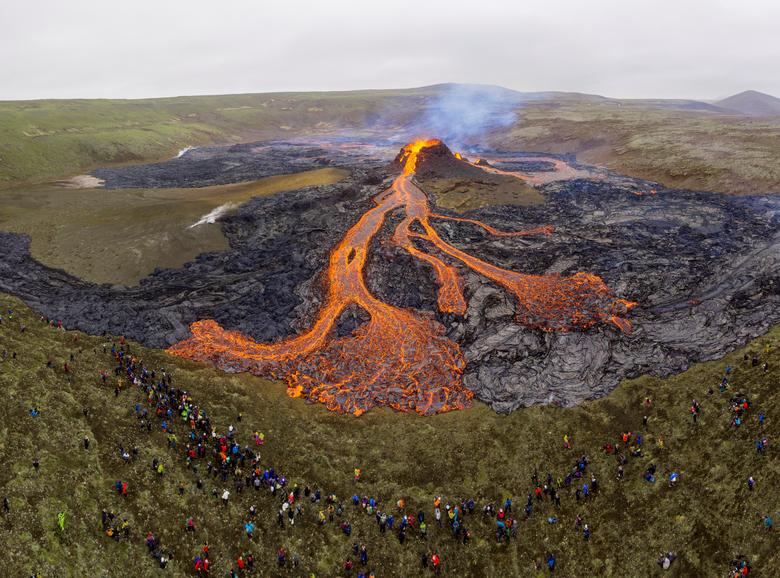 A volcano in Iceland spewing lava into the sky since it erupted last Friday could continue its spectacular display for years, potentially becoming a new tourist attraction on the island known for its natural wonders.

Thousands of Icelanders have flocked to the site of the eruption on the Reykjanes Peninsula, some 30 kilometres southwest of the capital, hoping to be awed by the rare lava fountains and even to cook a meal on the scorching crust of magma.

Drone footage filmed over the crater shows the molten lava bubbling and spurting, and gushing down the sides of the volcano.

“With the caveat though, don’t go too close.”

To cope with the hoard of visitors, authorities in Iceland set up a 3.5 kilometre (2.2 miles) hiking trail to the eruption site and are patrolling the area to prevent onlookers from venturing into hazardous areas polluted by volcanic gasses.

“People were hiking from many different directions into the area,” Agust Gunnar Gylfason, project manager at the Department of Civil Protection and Emergency Management, told Reuters.

Gylfason estimated more than ten thousand people had ventured to the site since Friday evening, some of whom had needed rescuing due to the harsh weather and travelling without enough food or proper clothing.

Since the initial eruption, lava has steadily seeped out of the volcano at a rate of between 5 to 10 cubic metres per second, Thordarson said, a flow strong enough to ensure the lava does not solidify and close the fissure. For now.

“If it drops below three cubic meters, it’s very likely that the eruption will stop,” Thordarson said.

He compared the lava flux to that of the Pu’u ‘O’o eruption in Hawaii, which began in 1983 and continued to erupt for 35 years.

“It could end tomorrow or it could still be going in a few decades.”