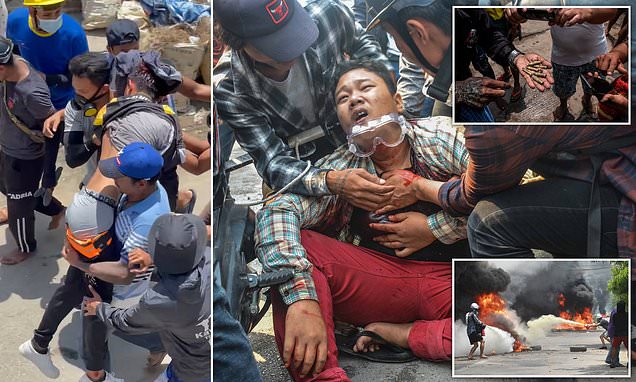 WARNING: GRAPHIC IMAGES. At least 90 people, including a boy believed to be five years old, have been killed during protests which saw thousands take to the streets across Myanmar (an injured protestor, main). The deaths on Saturday, one of the bloodiest days since the coup, takes the number of civilians reported killed to nearly 400. The latest deaths have been branded ‘senseless’ by Foreign Secretary Dominic Raab, adding that the killings mark ‘a new low’. Dr. Sasa, a spokesman for CRPH, an anti-junta group set up by deposed lawmakers branded the events as a ‘day of shame’. In Thaketa township Yangon, anti-coup protesters extinguish fires during a protest (inset, right). Pictured: Protestor with a head injury is carried to safety in Kawthoung and protestors show spent cartridges (inset top).