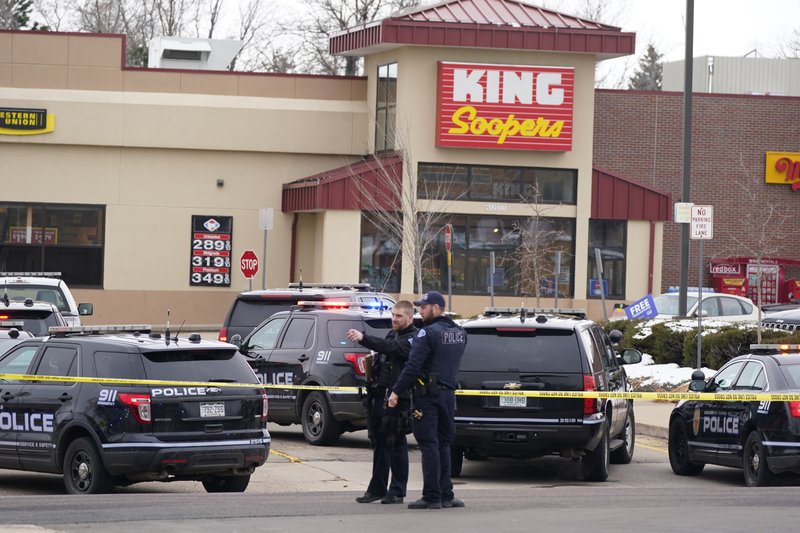 BOULDER, Colo. (AP) — A shooting at a Colorado supermarket killed 10 people Monday, including a police officer who was the first to respond to the scene, authorities said.

Police arrested a suspect, but didn’t reveal his name or any details about the shooting at an evening news conference where Boulder police Chief Maris Herold fought back tears.

Investigators had just begun sorting through evidence and witness interviews and didn’t have details on a motive for the shooting at the King Soopers store in Boulder, which is about 25 miles (40 kilometers) northwest of Denver and home to the University of Colorado, said Boulder County District Attorney Michael Dougherty.

“This is a tragedy and a nightmare for Boulder County,” Dougherty said. “These were people going about their day, doing their shopping. I promise the victims and the people of the state of Colorado that we will secure justice.”

The attack was the seventh mass killing this year in the U.S., following the March 16 shooting that left eight people dead at three Atlanta-area massage businesses, according to a database compiled by The Associated Press, USA Today and Northeastern University.

It follows a lull in mass killings during the pandemic in 2020, which had the smallest number of such attacks in more than a decade, according to the database, which tracks mass killings defined as four or more dead, not including the shooter.