Here we go: Authorized biography of Eugene Peterson backs up his support of homosexuality after he previously retracted support for same-sex marriage

(RNS) — The late Eugene Peterson, the pastor and theologian best known for his popular paraphrase of the Bible called “The Message,” steered clear of controversy most of his career. But in July 2017, I published an interview with Peterson in which he told me homosexuality is “not a right or wrong thing as far as I’m concerned.” When asked if he would perform a same-sex wedding ceremony if he were still ministering, Peterson responded flatly, “Yes.”

One day after the uproar, a statement, released on Peterson’s behalf, said the author reaffirmed a belief marriage should be “one man to one woman” and claimed he felt “put on the spot” by my questions. Regarding his assertion he would perform a gay wedding, it stated, “I hope I never am asked,” and, “on further reflection and prayer, I would like to retract that.”

Peterson died the next year, leaving his fans and followers wondering what this paragon of Bible wisdom actually thought about LGBTQ inclusion.

This murky water may clear later this month, when a long-awaited authorized biography of Peterson is released. Drawing on never-before-published letters, journals and exclusive interviews, Winn Collier’s “A Burning in My Bones” reveals while Peterson long wrestled with the Bible’s teachings on homosexuality, he at last embraced LGBTQ inclusion on the grounds of Christian love.

Collier expends many words demonstrating Peterson’s desire to steer clear of “combustible issues.“ While Peterson questioned the existence of a literal hell and leaned toward universalism, the notion that all will ultimately be saved and enjoy relationship with God, “he’d not arrived at any definitive position” on many of these issues, Collier writes. Peterson was “far more comfortable with ambiguity” than many culture-warring theologians and pastors today. 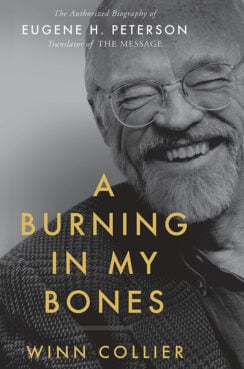 “A Burning in My Bones” by Winn Collier.
Courtesy image

According to Collier, “Eugene thought that the hardened, absolutized positions of opposing theological poles typically framed conversations in ways that lacked wisdom, humility, and a Spirit-inspired way forward.”

But above all other divisive issues, “the controversy that vexed Eugene the most, the one he struggled the most to understand, centered on the question of same-sex marriage.” For most of his life and career, Peterson “understood marriage in historic terms.”

Peterson was first a Bible scholar, not a cultural critic. In excerpts from a 2011 letter Collier quotes, he speaks rather candidly about his struggle to understand the sacred texts’ handful of verses that address the topic. In it, Peterson says he has “considered the biblical evidence carefully and prayerfully,” and concluded, “I don’t think the Biblical evidence is nearly as black and white as the evangelicals maintain.”

“The Message” translation does not include the word “homosexual” or “homosexuality.” (Those words do not appear in any English translation of the Bible until 1946.) But the letter demonstrates how Peterson was wrestling with what the words mean.

“It is pretty clear that homosexual orientation is not a sin. I think the evidence is pretty clear on that by this time,” Peterson wrote. The verses that seem to discuss same-sex relationships may be referring to male temple prostitutes, pederasty and the “widespread promiscuity associated with pagan religion,” he explained, adding that “a considerable number of biblical scholars and theologians who are evangelical and take the Bible with utmost seriousness” now hold this position.

“It is not at all clear that the citations of homosexuality in the Bible are covered by what is being discussed now by the church. … The biblical world had no notion of what is being proposed now, same sex couples committed by marriage covenant to faithfulness,” Peterson wrote.

Three years later, in an interview forum at Western Seminary, Peterson was asked how to pastor families whose children come out as gay. He responded, “I’ve helped several families accept their children as gay. And, uh, they are devastated at first and then with just careful, prayerful conversation, they’ve finally accepted that this is not a bad thing, that this can be a good thing. This can be a flourishing thing.”

These comments shine a light on Peterson’s pastoral instincts. He prioritized compassion and care of human beings above winning a theological food fight. Collier’s book repeatedly portrays Peterson’s inclination toward love with heartwarming detail. He had many gay and lesbian friends and welcomed LGBTQ people into his church with no strings attached.

“I have had a number of same-sex couples in my congregation, devout Christians and faithful to their partners. Evangelical and Bible believing,” he wrote in an undated letter. “This is hardly a matter of ‘unrestrained sexual expression.’ Not that there is not plenty of such in our culture, but maybe no more among gays than among straights.”

In an early letter to Collier, Peterson told of a pastor friend who performed a wedding for his lesbian daughter and said, “I don’t think I could ever do that.” But in a later missive, Peterson told Collier, “The longer I thought about it, I decided that I could and would (perform a same-sex wedding) if my daughter (or sons) had invited me into that intimacy.”

While never claiming the Bible overtly blessed same-sex relationships, Peterson, it’s clear, was convinced that Christians are called by Christ to be lovers, not judges. And this was especially true when it came to pastors like him. As he wrote in a 2012 letter: “I don’t think as pastors we are called to be Christ’s policemen.” 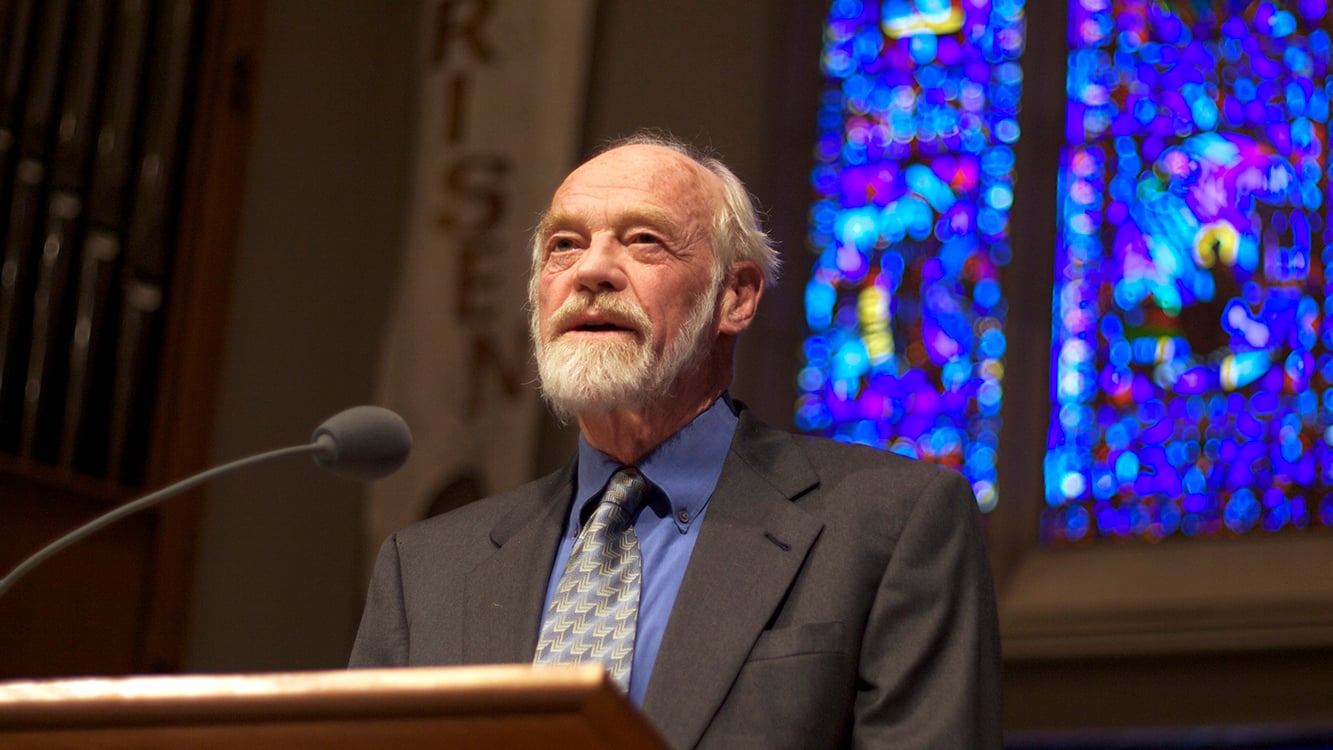 Eugene Peterson lectures at University Presbyterian Church in Seattle, Washington, in May 2009. Photo by Clappstar/Creative Commons

He was horrified by Christians’ disgust and disdain for LGBTQ people. “The American evangelical church has been so mean towards homosexuals, excluded and discriminated against, taunted and reviled, that I want nothing to do with the arguments and prejudices that lurk just beneath the surface of so much same-sex concern,” he wrote in his 2011 letter.

Homophobia cloaked in religious language is just bigotry with moral wallpaper. Peterson knew this, and he grieved the way gays and lesbians were “treated as lepers” by so many Christian churches.

But if Peterson was so passionately concerned for LGBTQ people, how are we to make sense of his 2017 retraction? It’s one of the bigger bombshells in Collier’s book: Peterson never actually wrote it.

Unplugged from social media and showing what may have been early signs of dementia, Peterson couldn’t comprehend the controversy his comments created or the tidal wave of criticism he was receiving. But Peterson’s literary agent, Rick Christian, recognized what was at stake and “felt the chaos necessitated some kind of response,” Collier writes.

Christian enlisted Don Pape, the publisher at Navpress, which distributed “The Message,” and Navpress editor David Zimmerman to help salvage the situation. They started by “putting some of what we understood to be his thoughts on paper.” This draft was passed to Christian, who reviewed it with Peterson, making one modification at Peterson’s request.

The abrupt retraction seemed difficult to reconcile with my interview, but it was enough to quell the conservative mob and keep his books on evangelicals’ shelves.

Of the retraction, Eric wrote, “in several respects it does not accurately reflect his convictions. In many ways, it doesn’t even sound like him,” before revealing his father’s heart on the matter:

The transcript of the interview simply shows a one-word “Yes” answer to the question, “If you were pastoring today and a gay couple in your church who were Christians of good faith asked you to perform their same-sex wedding ceremony, is that something you would do?” What the transcript does not reveal is the long pause that spanned between the question and the answer. I could be wrong about this, but I’m quite sure that in that pause Eugene was thinking about one of his grandchildren, considering how he would respond if she asked him to officiate at her wedding. After a lifetime of being immersed in the scriptures and devoted to the way of prayer, after fifty-nine years of pastoral ministry, there was only one honest response. And while the complexity of the question would certainly have benefited from a much longer, more thoughtful conversation, his answer, both then and now, is as close to the truth, as congruent with his convictions and beliefs, as possible: yes.

For my part in this ordeal, I remain conflicted. My journalistic integrity required me to publish a major Christian leader’s newsworthy response. But fulfilling my duty meant inserting an 84-year-old man I had long admired into a polemicized war.

When Collier interviewed me for his book more than a year ago, I told him my primary failure was not asking Peterson at least one follow-up question. I should have asked him how the Bible — the book he devoted his life to — informed his shifting views. Peterson deserved the opportunity to describe his position with the level of care and nuance he applied to all of his work. But I was stunned by his answer and unable to conjure another question in the moment. As a young opinion writer speaking with a spiritual sage whose work had profoundly impacted my life, I failed both Peterson and my readers.

Thankfully, Collier has completed the work I left undone in 2017 and allows Peterson to do what he did best: raise questions and not merely answer them. That’s hard work, but good work. And the result is a multi-dimensional portrait of a pastor whose wisdom sidesteps soundbites, transcends categories and cannot be confined to the cardboard boxes the rest of us can’t seem to think beyond. Readers can’t help feeling a little burning in their bones.