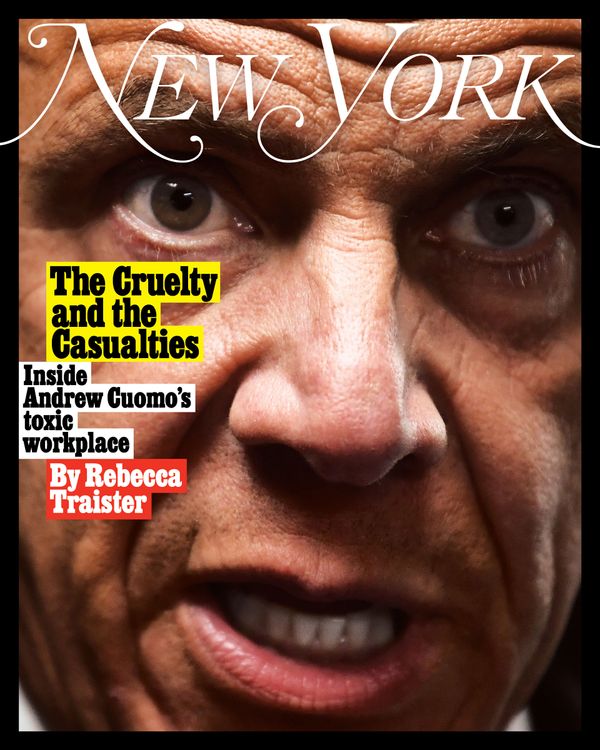 In a cover story published by New York Friday, Rebecca Traister reports new allegations of inappropriate behavior by New York governor Andrew Cuomo, who has already been accused of misconduct by six women, including a former aide who alleges he groped her in private late last year, and now faces an impeachment inquiry.

Through interviews with more than 30 women who have worked or interacted with Cuomo, Traister finds that bullying was a defining element of his management style: “It’s an understanding of political power in which ruthlessness is read as greatness, abuse as passion,” she writes. Traister details the connections between his reported behavior and broader allegations of administration impropriety — including an alleged cover-up of nursing-home deaths during the pandemic. As one former staffer told her, “The same attitude that emboldens you to target a 25-year-old also emboldens you to scrub a nursing-home report.”

Another former staffer, Kaitlin, who asked that her last name not be published, described meeting the governor while working at a fundraiser in 2016. When they were introduced, she says Cuomo grabbed her “in a kind of dance pose” as a photographer took a picture. She recalled thinking, “This is the weirdest interaction I’ve ever had in my life. I was like, Don’t touch me. Everybody was watching.” The same week, she received a voice-mail from Cuomo’s office requesting that she interview for a job, though she never gave his office her contact information. “We all knew that this was only because of what I looked like,” Kaitlin told New York. “Why else would you ask someone to come in two days after you had a two-minute interaction at a party?”

Kaitlin says she was frequently pressured to dress expensively during her time in the Cuomo administration. “I did what I could with my clothes,” she said, “and it wasn’t good enough for them.” On some mornings when Cuomo started his day early, he would ask her if she “‘decided not to get ready today?’” It was clear to Kaitlin what he was doing. “I’d think, You’re such an asshole; you know you left early so I didn’t have time.” Her experience was not an outlier: Other women who worked in Cuomo’s office told New York that female aides were consistently told to dress up, and some were explicitly told by senior staff that they had to wear high heels whenever the governor was around (although Cuomo’s office denies this). Cuomo’s recruitment process also was not isolated: Kaitlin remembered that early in her tenure, he asked aides at a staff meeting to find a young woman he’d met at a party the previous night for a potential job.