Mourners Line Up to Remember Late Televangelist Frederick K.C. Price at His FaithDome in Los Angeles

LOS ANGELES (RNS) — A steady stream of mourners filed into the FaithDome at Crenshaw Christian Center on the first of two days of a public viewing honoring the Rev. Frederick K.C. “Fred” Price, who built the massive megachurch and led its mostly Black congregation of 28,000. Price died in February after a bout with COVID-19.

Attendees were required to wear masks and have their temperatures taken before entering. Once inside, they lined up at a distance from each other as they waited to pass Price’s closed casket.

Framed photos of Price stood beside the casket in a cordoned area as video played showing Price reciting Scripture and talking about the role of Crenshaw Christian Center in the community. Church officials wore masks and face shields as they ensured people maintained their distance.

A second public viewing is scheduled for Friday (March 5). A family service before Price’s burial on Saturday will be streamed on the church’s social media accounts.

For Judy Venable, one of those who attended the viewing, Price’s death has been tough to grapple with. “It’s a great loss. I feel cheated. I feel it’s unfair,” said Venable. “Why would Fred get hit and have to leave? I loved him. I really did.” 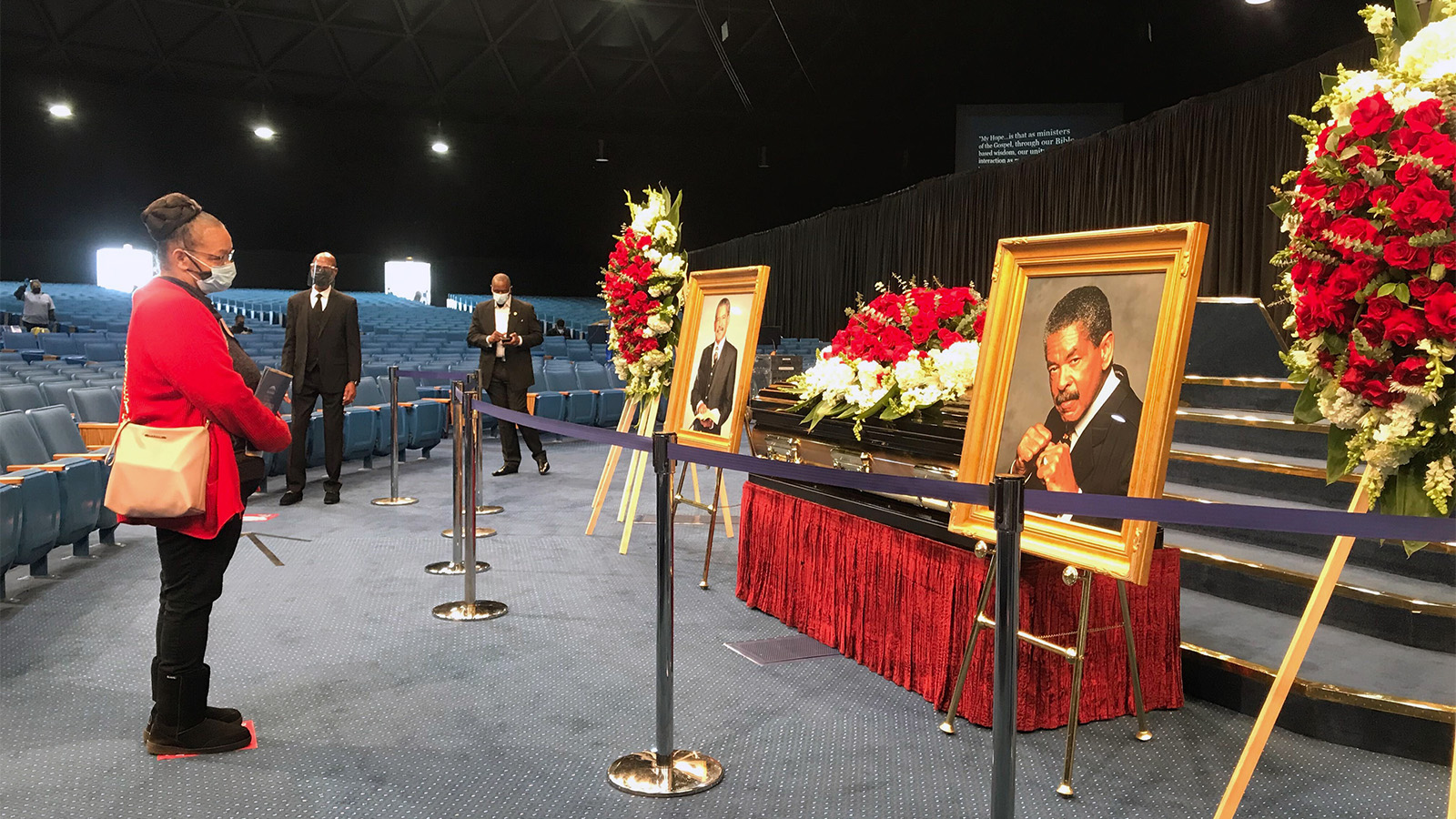 Bishop Frank L. Stewart of Zoe Christian Fellowship in Whittier, California, said he worked for Price for five years before leaving to plant churches abroad. While he wound up heading his own church, Stewart said he always considered Price his pastor.

Stewart said Price taught him “how to hear the voice of God come to me.”

“He set the stage for many people to learn faith,” Stewart said outside the FaithDome on Thursday.

Price, a charismatic pastor, taught a message of prosperity, which was featured on his long-running television program, “Ever-Increasing Faith.”

He built the 10,145-seat FaithDome at Crenshaw Christian Center to house its Ever Increasing Faith Ministries, which he founded in 1973. The FaithDome was one of the largest houses of worship in the country when it opened in 1989, according to the Los Angeles Times.

Price eventually started his new church with no denominational ties, which grew from about 300 worshippers to a congregation of thousands.

In 2008, Price was named an “apostle,” according to the biography posted on the church’s website and, after retiring as pastor of Crenshaw Christian Center, handed the pulpit over to his son, Frederick K. Price Jr.

For Darlene Baysa, who has visited the church for more than 15 years, Price was “a great man of God.” Baysa became familiar with the church through Price’s television ministry. She admired his “profound teaching.”

“He impacted our lives with the word of God. He demonstrated character, integrity, perseverance, love, empathy,” Baysa said.

“My life will never be the same,” she said. “I’m still grieving. It really has affected me. … He left us such a legacy.”

Price is survived by his wife of 67 years, Betty Ruth Price; his four children, Angela, Cheryl, Stephanie and Frederick; 10 grandchildren; and five great-grandchildren, the church said.