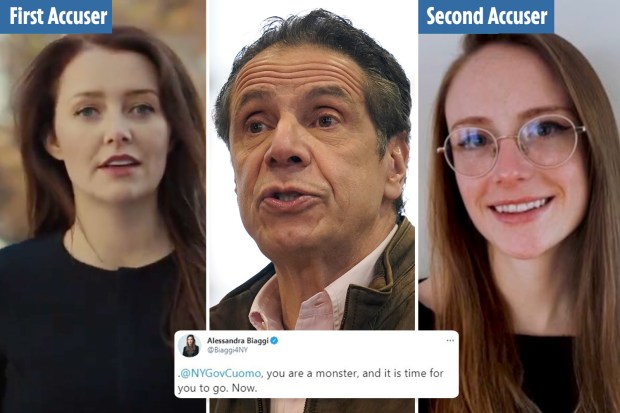 Andrew Cuomo was branded a “monster” by a Democrat state senator last night after a second former aide accused him of sexual harassment.

Other leading Democrat women also turned on the New York governor and demanded an inquiry into the “abhorrent and heartbreaking” allegations.

But senior politicians in Cuomo’s own party said this was not enough and demanded a “truly independent” investigation.

Last night Charlotte Bennett, 25, claimed her 63-year-old boss quizzed her about her sex life after she went to him for help as a survivor of sexual assault.

She told the New York Times Cuomo asked if her she was monogamous in her relationships and if she had ever had sex with older men.

“I understood that the governor wanted to sleep with me, and felt horribly uncomfortable and scared,” she said.

“And was wondering how I was going to get out of it and assumed it was the end of my job.”

She said she left the governor’s office in November following the alleged harassment, which came during the height of the Covid pandemic.

Charlotte’s claims came three days after another ex-aide, Lindsey Boylan, claimed Cuomo kissed her on the lips and suggested they play strip poker.