Inside Russia’s Mass Arrests: Claims of Beatings, Threats and ‘War’ Against Rights Monitors 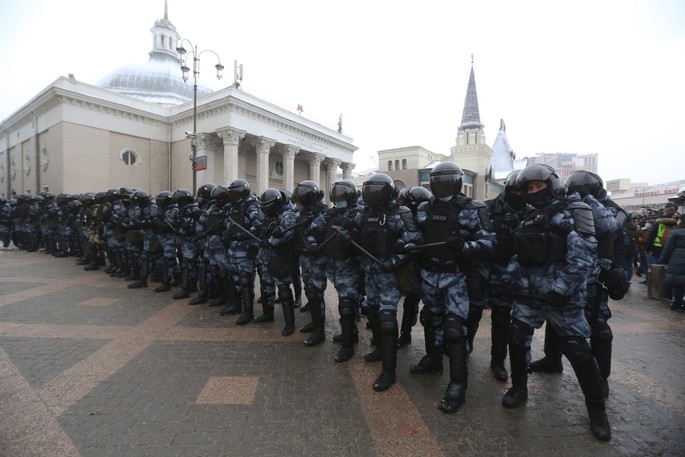 MOSCOW – Authorities call it “Plan Fortress” – a secretive emergency protocol to lock down Russian police stations in case of armed attack. Now it’s being used with a new goal: to keep out human rights lawyers trying to aid Russians held after mass arrests during pro-opposition demonstrations.

The effort to freeze out the lawyers – detailed by the independent police watchdog group OVD-Info – conveys the siege mentality of Russian authorities after sweeping crackdowns on protesters and others backing jailed opposition leader Alexei Navalny.

But the Kremlin’s effort to portray the protests as foreign-fomented violence to undermine the country is beginning to erode.

As some of the more than 11,000 detainees emerge from crowded detention centers, they tell of the violence, fear and potential rights violations.

Many detainees were beaten with truncheons or shocked with Tasers and described going up to 16 hours without food, water, access to toilets, according to reports compiled by OVD-Info, rights lawyers and interviews by The Washington Post. Some women were threatened with rape, according to Grigory Durnovo of OVD-Info.

Police have filed more than 90 criminal charges and more than 9,000 misdemeanor charges among those arrested across 125 cities during waves of protests calling for the release of Navalny, who returned to Russia from Germany on Jan. 17 after being treated for a near-fatal nerve agent poisoning in August in Siberia.

There have been no acquittals, OVD-Info reported.

It is unclear how rights groups and others will pursue the claims by the detainees. But, in the past, similar allegations against Russian authorities have brought appeals to the European Court of Human Rights, which has repeatedly condemned Russia’s crackdowns on the right to protest, unlawful arrests and detentions.

The State Department last month strongly condemned Russia’s “use of harsh tactics against protesters and journalists.”

Kremlin spokesman Dmitry Peskov said there have been “no repressions.” He described specific accounts from detainees of abuses as inventions or distortions.

The cases, however, have started to build a compendium of alleged abuses that could add fuel to expected opposition protests in the spring and summer, with Russian authorities eager to quash protest movement before parliamentary elections planned for September.

According to OVD-Info accounts, some protesters were taken to special rooms for beatings in police stations in Moscow and St Petersburg. Detainees said they were not allowed have their phones to call lawyers or family. Those who tried to stand up for their rights were denied access to a toilet for many hours, or were given longer sentences, Durnovo said.

The reports by OVD-Info, lawyers and detainees could not be independently verified by The Post, but they conform with videos, accounts by local media and human rights groups and evidence to the European Court of Human Rights from previous protests.

He said an opposition volunteer, Alyona Kitayeva, reported that a policeman put a plastic bag over her head, kicked and beat her and threatened to shock her unless she unlocked her phone.

Detainees describe police cells without mattresses, heating or pillows. Some told of being waked in the middle of the night for no apparent reason, loaded into vans and driven to other stations.

“Tightening the screws. That is what is happening right now,” said St. Petersburg lawyer Sergei Loktev, who represented some protesters. “If someone has a different view to the authorities, that opinion must be destroyed.”