France and Germany Brace for Another Lockdown as Merkel Sits on 1.2 Million Oxford Vaccine Doses People Refuse to Take 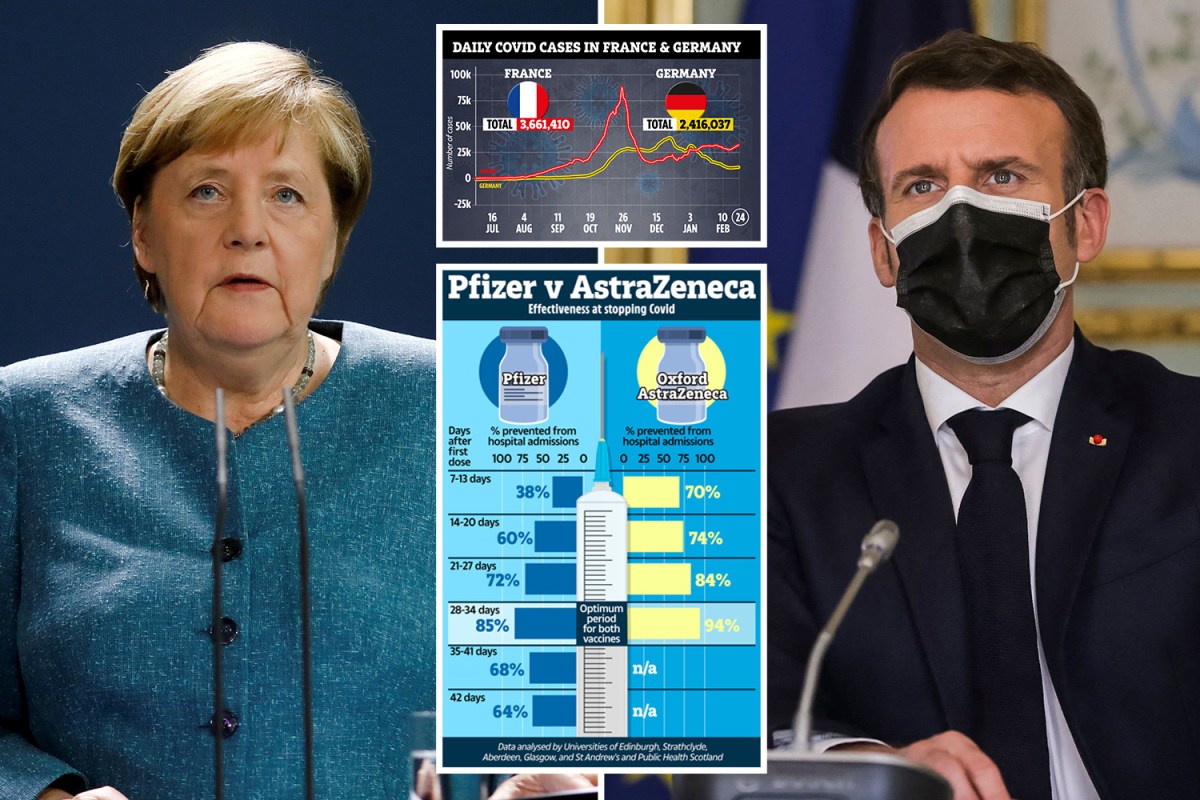 France and Germany are now both braced for further Covid lockdowns after they shunned the Oxford vaccine.

It comes as a German virologist today revealed the country was sitting on a whopping 1.2 million Oxford jabs – after EU leaders repeatedly made baseless allegations about its efficacy.

Angela Merkel today said a “third wave” of infections could sweep the country as it struggles with the jab rollout – as the UK counts down the days to freedom.

Just four per cent of the German population has been immunised, compared to England’s 27.4 per cent, according to the BBC.

Responding to Germany’s reluctance to get the jab, Professor Thomas Mertens told BBC Radio 4 that there was a “problem” in rolling out the vaccine in Germany.

He said: “At the moment we have 1.4 million doses of AstraZeneca vaccine in-store and only about 240,000 doses have been given to the people, that is definitely a problem at the moment.”

He added: “We are trying to convince people to accept that vaccine and build up the trust for the vaccine within the population.

“But as you may know, there is a psychological problem too and it will take some time to reach this goal.”

Angela Merkel has said she will not take the Oxford/AstraZeneca vaccine because she is too old, despite begging residents to take the jab.

The German chancellor, 66, was asked if she would take the jab to set an example to a country where many are refusing to take the Oxford jab and 1.2million of the shots are lying unused in storage.

But Merkel told FAZ that she was not eligible because German regulators have restricted the jab to under-65s, a move which has yet to be reversed even after data from Scotland showed it is highly effective in the elderly.

Meanwhile, Merkel and the country’s state premiers have agreed to extend Covid restrictions until March 7 in a bid to stop a surge in cases.

In an interview with Frankfurter Allgemeine Zeitung, Ms Merkel warned that highly transmissible new variants threatened to undermine the gains made in lockdown.

She told the newspaper: “Because of (variants), we are entering a new phase of the pandemic, from which a third wave may emerge.

“So we must proceed wisely and carefully so that a third wave does not necessitate a new complete shutdown throughout Germany.”