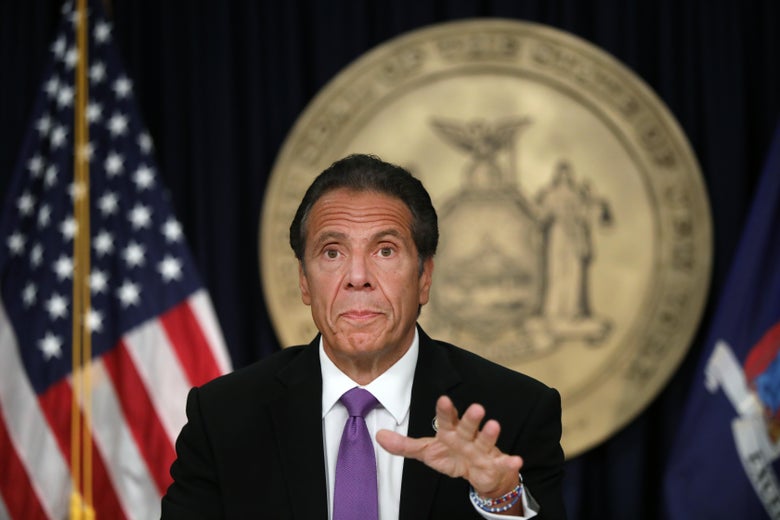 I should have been shocked by the Governor’s crude comment, but I wasn’t.

We were flying home from an October 2017 event in Western New York on his taxpayer-funded jet. He was seated facing me, so close our knees almost touched. His press aide was to my right and a state trooper behind us.

“That’s exactly what I was thinking,” I responded sarcastically and awkwardly. I tried to play it cool. But in that moment, I realized just how acquiescent I had become.

Governor Andrew Cuomo has created a culture within his administration where sexual harassment and bullying is so pervasive that it is not only condoned but expected. His inappropriate behavior toward women was an affirmation that he liked you, that you must be doing something right. He used intimidation to silence his critics. And if you dared to speak up, you would face consequences.

That’s why I panicked on the morning of December 13.

While enjoying a weekend with my husband and six-year-old daughter, I spontaneously decided to share a small part of the truth I had hidden for so long in shame and never planned to disclose. The night before, a former Cuomo staffer confided to me that she, too, had been the subject of the Governor’s workplace harassment. Her story mirrored my own. Seeing his name floated as a potential candidate for U.S. Attorney General — the highest law enforcement official in the land — set me off.

In a few tweets, I told the world what a few close friends, family members and my therapist had known for years: Andrew Cuomo abused his power as Governor to sexually harass me, just as he had done with so many other women.

As messages from journalists buzzed on my phone, I laid in bed unable to move. I finally had decided to speak up, but at what cost?

Parts of a supposed confidential personnel file (which I’ve never seen) were leaked to the media in an effort to smear me. The Governor’s loyalists called around town, asking about me.

Last week, Assemblymember Ron Kim spoke out publicly about the intimidation and abuse he has faced from Governor Cuomo and his aides. As Mayor de Blasio remarked, “the bullying is nothing new.” There are many more of us, but most are too afraid to speak up.

I’m compelled to tell my story because no woman should feel forced to hide their experiences of workplace intimidation, harassment and humiliation — not by the Governor or anyone else.

I expect the Governor and his top aides will attempt to further disparage me, just as they’ve done with Assemblymember Kim. They’d lose their jobs if they didn’t protect him. That’s how his administration works. I know because I was a part of it.

I joined state government in 2015 as a Vice President at Empire State Development. I was quickly promoted to Chief of Staff at the state economic development agency. The news of my appointment prompted a warning from a friend who served as an executive with an influential civic engagement organization: “Be careful around the Governor.”

My first encounter with the Governor came at a January 6, 2016, event at Madison Square Garden to promote the new Pennsylvania Station-Farley Complex project. After his speech, he stopped to talk to me. I was new on the job and surprised by how much attention he paid me.

My boss soon informed me that the Governor had a “crush” on me. It was an uncomfortable but all-too-familiar feeling: the struggle to be taken seriously by a powerful man who tied my worth to my body and my appearance.

Stephanie Benton, Director of the Governor’s Offices, told me in an email on December 14, 2016 that the Governor suggested I look up images of Lisa Shields — his rumored former girlfriend — because “we could be sisters” and I was “the better looking sister.” The Governor began calling me “Lisa” in front of colleagues. It was degrading.