Israel reopens economy after almost HALF of its population get shots 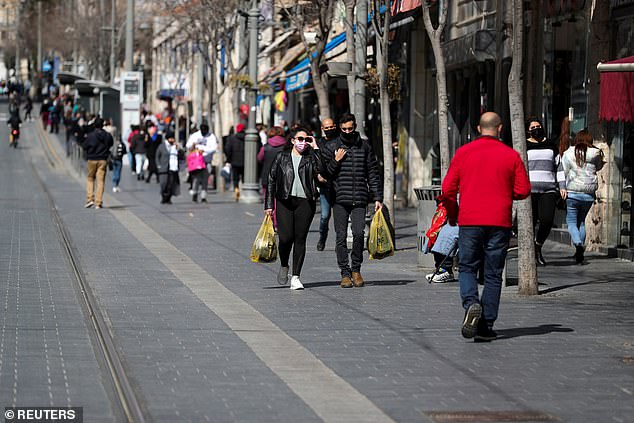 Israel has reopened its economy after almost half of its population has been vaccinated as it was revealed that Pfizer’s Covid jab stops 89.4 per cent of transmission.

The country’s world-beating vaccination programme has led to the number of hospital patients over the age of 60 visiting to fall drastically compared to younger people.

While shops are now open to all in Israel, the public must carry a vaccine passport if they want to visit gyms, hotels and theatres.

The innovative ‘green pass’ is issued to those who have had both doses of the Pfizer vaccine more than a week prior or recovered from Covid-19 with presumed immunity.

They will have their ‘Green Pass’ status displayed on a Health Ministry app that they must present at certain venues.

The vaccine, which was rolled out in a national immunisation program that began on December 20, was 89.4 per cent effective at preventing laboratory-confirmed infections, according to a copy of a draft publication reported in Der Spiegel.

The fall in Israelis over the age of 60 attending hospital with Covid-19 is a dramatic show of how effective the Pfizer vaccine is, with Israel’s health ministry announcing that the risk of illness from Covid-19 dropped by 95.8 per cent among people who received both shots of Pfizer’s vaccine.

The positive steps have implications for Britain where data suggests that the roll-out of vaccines to the older age groups alongside lockdown restrictions are reducing death rates.

‘The performance of the vaccine is really good news,’ epidemiologist Mark Woolhouse of Ediburgh University told The Observer. ‘You never quite know how clinical trials will translate in a true mass vaccination programme.

‘But the numbers are looking very good. The vaccines protect very well against severe disease.’