Indonesian Frog takes a ride on the tortoise taxi 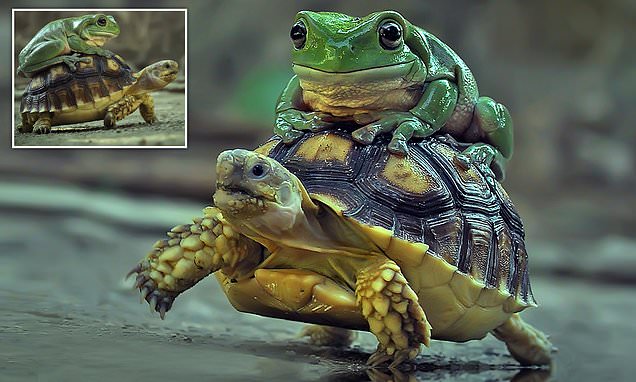 See the hilarious moment a three-ounce frog decided to hitch a lift on the back of a tortoise.

The series of side-splitting snaps showed the dumpy tree frog appearing to smile as it seemed to tell the small sulcata tortoise to ‘giddy up’ before the pair rode away.

Another image showed the five-pound tortoise lifting its feet off the ground as it plodded on with the amphibian on top of its shell.

The incredible pictures were taken in Padang, Indonesia, by photographer Yan Hidayat (35) who is also from Padang. Yan got within nine-feet of the spectacle and captured the images on his Nikon D90 using a Nikon 105 F2.6 Vr macro lens.

‘In these photos, I like to see the friendship between the tortoise and the frog,’ said Yan.

‘When people see these photos, they say how good they are and how it’s nice to see the animal’s friendship.

‘Animals are our friends. It’s sad to see them being sold for slaughter for human benefit.’