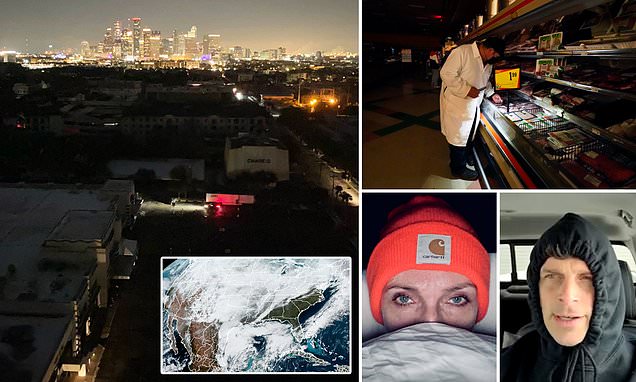 Furious Texans who have been without electricity for two straight days are demanding answers as to why the energy rich state has been left paralyzed and unable to produce enough power to face a winter storm – as the electrical grid CEO refuses to take the blame for the ongoing crisis.

The winter storm has resulted in people sleeping in their cars to keep warm amid unprecedented rolling blackouts that have plunged five million into darkness.

Images showing empty office buildings in downtown Houston still lit up overnight has sparked outrage given the millions elsewhere without power, while hundreds have been forced to line up outside grocery stores in the freezing cold for supplies.

Texas Gov Greg Abbott on Tuesday demanded an investigation into the state’s main power grid operator and officials in Galveston County said they were bringing in refrigerated trucks to handle the expected influx of dead bodies as a result of the storm.

The storm has so far resulted in 15 deaths in multiple states. Deaths in Texas included a woman and a girl who died from suspected carbon monoxide poisoning in Houston at a home without electricity from a car running in an attached garage

‘The Electric Reliability Council of Texas has been anything but reliable over the past 48 hours… Far too many Texans are without power and heat for their homes as our state faces freezing temperatures and severe winter weather. This is unacceptable,’ Abbott said.

The Electric Reliability Council of Texas, which oversees the state’s main power grid, is still struggling to restore power after failing to keep up with heightened demand. ERCOT provides electricity to about 90 percent of the state.

CEO Bill Magness has refused to take the blame for the crisis, saying it is down to ‘catastrophic conditions’. He told WFAA that he was unable to say when power would be restored.