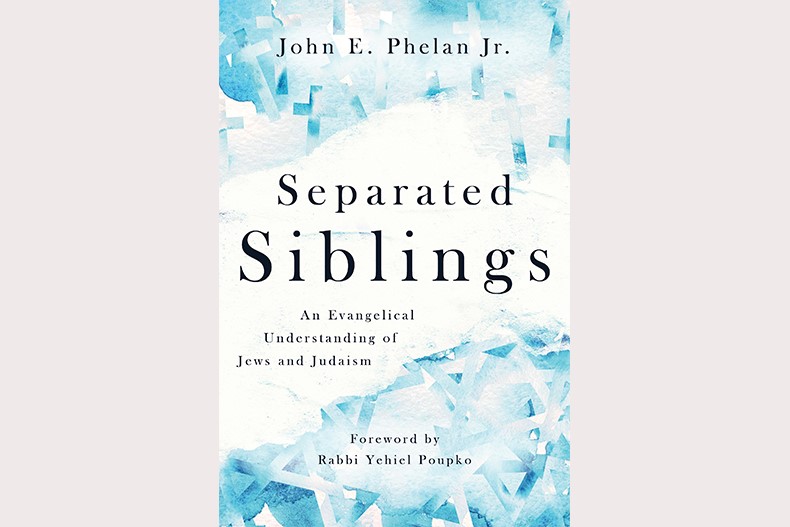 I will never forget the day I stood on the ruins of a third-century synagogue in Capernaum, just a stone’s throw from the beautiful blue waters of the Sea of Galilee. I was leading a tour of Christian pilgrims. Our guide called our attention to Matthew 23:3, a verse I had read hundreds of times but which now suddenly jumped off the page: “You must be careful to do everything [the teachers of the law and Pharisees] tell you.”

I was shocked. How could Jesus have recommended the teachings of the Pharisees when he warned against their hypocrisy in the same verse (“But do not do what they do, for they do not practice what they preach.”)? How could I have missed this recommendation during decades of serious Bible study?

John E. Phelan Jr.’s Separated Siblings: An Evangelical Understanding of Jews and Judaism contains this and hundreds of other surprises. Phelan, a retired theology professor and one-time president of North Park Theological Seminary in Chicago, has provided Christians with one of the most engaging and comprehensive guides to Jewish thought and civilization in the last half-century. Readers are treated to detailed but delightful descriptions of Jewish terms, denominations, understandings of God, religious practices, historical events, and controversies. Phelan also uncovers new findings about the Jewishness of Jesus and Paul, and he relates the history of Zionism to the modern state of Israel.

The book is full of enlightening revelations. Christian readers will find resonance in Jewish texts they might otherwise overlook. The Kaddish, for example, is a daily Jewish prayer that begins with words nearly identical to the first petition in the Lord’s Prayer: “May His great Name grow exalted and sanctified.” Phelan observes that while the Talmud—a set of gargantuan reflections on both Jewish oral tradition and the Old Testament—might appear, to outsiders, as obsessed with “minor matters” of religious law, faithful Jews regard it as a divine guide to everyday holiness that puts reason to work “in service of love and obedience.”

Christians sometimes characterize Jewish practice as more focused on externals than matters of the heart. But Phelan points out, among many other examples of heart spirituality, the rabbinic insistence that the annual Day of Atonement “atones only for those who repent.”

Christian critics of Zionism often allege that Jewish yearning to return to Israel only began in the 19th century and was mostly secular. Yet Phelan notes that for the rabbis who edited the Babylonian Talmud in the fifth century, Israel was still the center of the world, and so “any Jew living outside of the land was missing something.” Only in the land could Jews observe the agricultural laws of Torah; therefore, as the Talmud states, “a small group of men in the Land of Israel is dearer to [the Holy One] than the great Sanhedrin outside of the land.”

This book should also surprise readers who have been led to believe that God rejected the Jews as his chosen people when most first-century Jews rejected Jesus as their Messiah. Phelan argues that while God’s covenant with Moses was conditional on Israel’s obedience, his covenant with Abraham was unconditional. Moses warned that God’s people would lose control of the land if they turned to idolatry (Deut. 28:36), but they would remain God’s chosen. As Paul himself states, “God’s gifts and his call are irrevocable” (Rom. 11:29). “Even the rejection of Jesus as messiah does not lead to the final rejection of the Jews,” writes Phelan. Paul “insisted in Romans 11 that the Jews are still ‘loved’ by God” (v. 28).