There’s a devil loose: Father is shot and pistol whipped in front of wife and their two-year-old during armed robbery in downtown Los Angeles 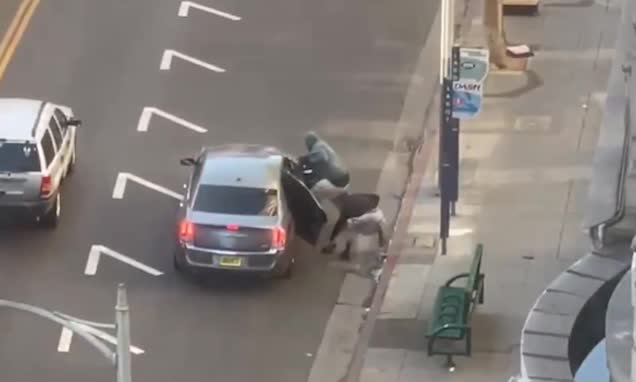 A father was shot and pistol whipped by armed robbers in front of his two-year-old in a shocking incident that was caught on CCTV.

Officers are looking for four assailants in the robbery in downtown Los Angeles which saw a man and a woman and their child threatened at gunpoint on Thursday.

The father was also shot in the arm and pistol whipped during the incident.

The couple were shopping with their child near Seventh and Hill streets when the incident happened at around 3:05pm.

According to police, two robbers jumped out of a gray Chrysler 300 and pointed guns at them.

The father, 26, was shot in the arm and pistol whipped in the head.

He was taken to hospital where he received treatment for his injuries, the LAPD said.